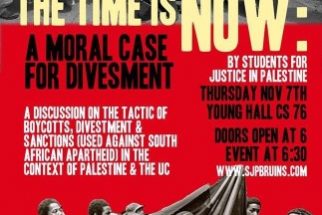 On Nov. 7, Students for Justice in Palestine (SJP) held a “The Time is NOW: A Moral Case for Divestment” panel that brought out the week’s biggest audience. The event began with a clip by Tim Ngubeni, the founder of the divestment campaign on South Africa at UCLA in the 1970s.

It is no secret that SJP has been doing some amazing things this year, so here are six reflections that we all should keep in mind:

1. Solidarity should be treated as a verb

SJP is a very action-based organization that invests its time into making meaningful change. REALITY CHECK: Do not think for a second that just because you have an SJP sticker on your laptop, you are doing Palestinians living under occupation any favors. The UC is currently invested in several companies that are profiting off the illegal military occupation (and knowingly complicit). This means our tuition is enabling this occupation. So educate yourself, and get involved with divestment!

If you have not watched the Tim Ngubeni video yet, then do so now! SJPs at other UCs have passed divestment resolutions and they are waiting on the rest of us to help put serious pressure on the UC Regents. In light of the failing peace process, the rapid expansion of illegal settlement building, and an approaching end to UN refugee status for Palestinian refugees, it is crucial that we mobilize quickly. Again, educate yourself, educate others, and get involved.

3.  Nothing comes over easy except eggs

Sophia Armen, last year’s student body president at UCSB, gave a humbling speech at Thursday’s event about how we as students need to recognize the fact that we are incredibly privileged and often unappreciative of the fact that student activists have fought for decades for our right to be at institutions like UCLA. We cannot view history as a bunch of glorious, distant events that happened within a vacuum. Student activism was just as controversial back then than it is now. If we want to see any change, then we need numbers. Pushing a movement forward doesn’t happen overnight, and it takes many dedicated people.

Time and time again, I hear students ask me why we are focused only on Palestine. Or, there is too much suffering in the world. Where to start? Since Palestinians living under occupation have called for BDS, it is our OBLIGATION to answer that call. And as active investors in the occupation, it is our moral responsibility to respect that call. If people spent as much time organizing and mobilizing as they did justifying their passivity, this world would look a lot different. ‘Nuff said.

You don’t need to be able to recount verbatim the Balfour Declaration in order to understand what’s happening on the ground. Human rights are being violated, illegal settlements are expanding, and Palestinians are asking YOU to divest. It’s as simple as that!

6. SJP is NOT a fashion statement

If you are in SJP because you think it’ll make you look cool, get out because you’re cramping their style. Before you can start to publically represent SJP, you must understand it and the Palestinian cause. SJP isn’t a hipster thing to do right now and people who use SJP activism as an avenue to be “radical” are actually doing a disservice to the cause and disrespecting the people involved. We need the support throughout the entire year…even with less glamorous work. That means help us think of, shape, and execute our fabulous projects throughout the year. We have huge plans this year and a million and one ways to get involved.