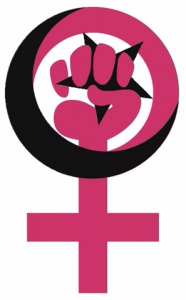 Here, feminism is defined as an ideology that identifies unequally many and restrictive powers that men hold over women, making a sex hierarchy, in society, and seeks to change or remove the structures that maintain these powers. Anti-feminism is defined as the ideology opposed to this change or removal, finding that no hierarchy exists or identifying the hierarchy but finding its existence to be just.