A Castle with Humble Beginnings 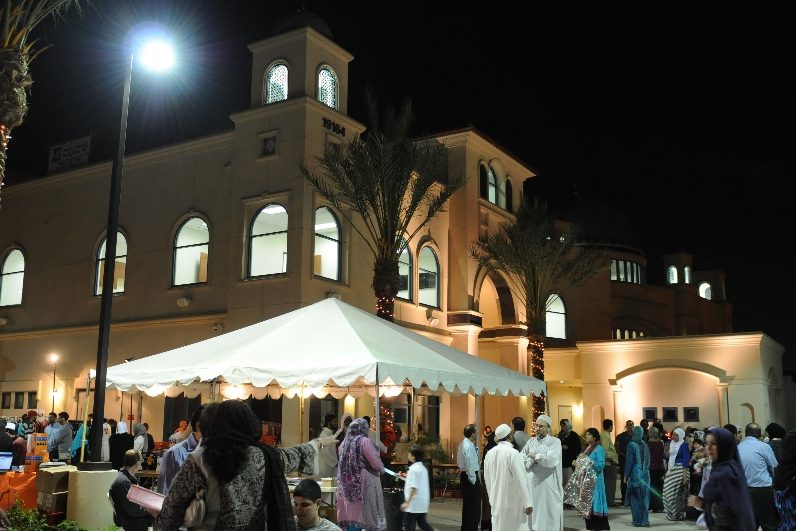 Two years ago I met the brothers and sisters who call the Islamic Center of San Gabriel Valley (ICSGV) home. It was an hour before maghrib (sunset prayer) when I parked my car in the gravel lot nearest the mosque, located in front of a construction site.

As I walked toward the entrance, I slowed down my pace to get a better look at the mosque. The material used to construct it looked temporary. When I entered the women’s prayer room again I was surprised, but now by the size of the space. The size did not seem sufficient to serve the Muslim communities of Rowland Heights, Diamond Bar and Walnut. Finally I found my friend and whispered, “This place is very small and…humble.” She smiled and pointed in the direction of the construction site, “Yes, but we’re getting bigger.”

Curious, I stepped outside to re-examine what I dismissed as a large office building in the makes. Now that I knew what I was looking at, the large dome and four minarets became clear. “Aladdin’s castle”, I thought. The structure was not yet painted and tiled, but it was a beautiful shell. I walked closer to it, my nose almost touching the steel fence surrounding the construction site. Craning my neck back, I felt small as I counted three floors. “Subhan’Allah (Glory be to God),” I whispered.

Rewind to 1983. An abandoned Catholic Church was for sale on Walnut Drive.

The Muslim community in San Gabriel Valley conducted their Jummah services (Friday congregational prayer) in the founder’s garage. They consisted of a handful of Muslim families. Within weeks the families raised the amount needed to purchase the church and within months it was paid in full. Soon after the adjacent chicken farm and grass fields were purchased. 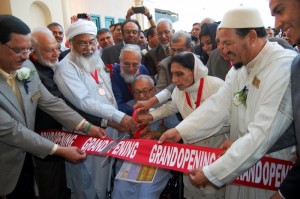 Founders cut the ribbon at the grand opening. (icsgv.com)

“One of the greatest strides this masjid (mosque) has made is to engage the Muslim and non-Muslim community. We have strong relations with the police, fire department and community council because we worked heavily with them to approve the masjid’s construction,” said Kashif Iqbal, a lifetime attendee of the center.

Now, my footsteps echo as I enter the 44,000 square foot structure. This time, the word “small” does not cross my mind.

Three libraries, a free clinic, a banquet hall, a chef’s kitchen, a charter school, a gym, a game room, administrative offices, and of course, musallahs (prayer rooms) are housed in this castle. Thirty years prior, the house of worship on this land was derelict and chicken coops lined the parking lot. 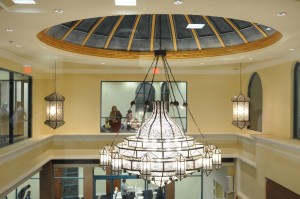 “This isn’t just a place to pray, it is a community center,” Mobeen Syed, Facilities Director of ICSGV, said as he gives me a tour. “We have an accredited K-8 school where kids have the choice of taking Chinese, Spanish or Arabic. Our free clinic is open to the community, Muslim and non-Muslim.”

Not only has the mosque grown in its tangible structure, but also in intangible ways which make the community diverse and welcoming. The founding members of the mosque are all of Indo-Pakistani descent, and eventually Arab members joined the congregation.

As I stroll through the structure, I observe people of all ethnic backgrounds and cultures. Some choose to don the abaya (long dress) traditional in the Middle East, while others wear fashionable Western clothes and drape their hijabs in such a way befitting the cover of Vogue.

Sara Mohamedy, Saturday school teacher at the center attributes the diversity of this mosque to the uniquely American-Islamic nature of the community. “The kids who attend this masjid grew up in America. Now it is stronger because it has become even more of an American-Muslim masjid. The speakers they bring in and the talks are central to the issues happening here.”

I look back one last time before I leave. I imagine what stood on this spot 30 years ago. I smell chickens, see a deserted church nearby, and sense the excitement of the Indo-Pakistani families who purchased the land. Then, I remember two years back thinking that the prayer room was too small.

Now, on this same land stands a castle in Los Angeles and its occupants represent the diversity of America. Again, I whisper, “Subhan’Allah” (Glory be to God). 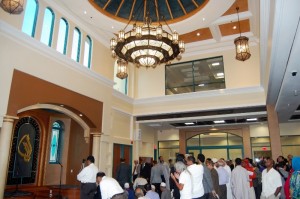 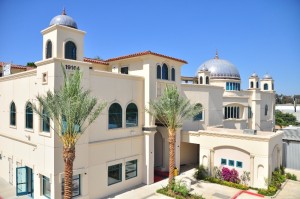 The center is 44,000 sq ft with three libraries, a free clinic, a banquet hall, a chef’s kitchen, a charter school, a gym, a game room, administrative offices,  and musallahs. (icsgv.com)