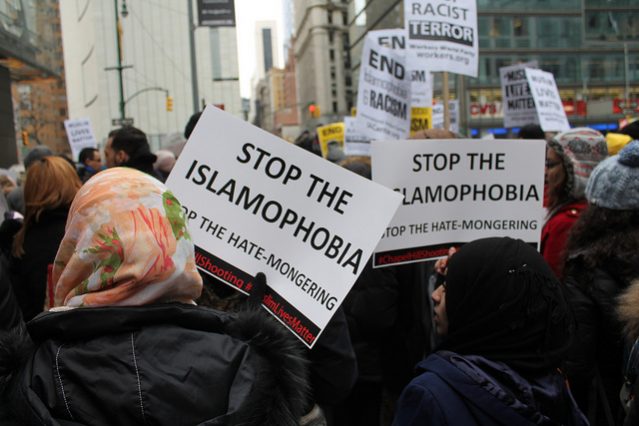 On Feb. 12, the Muslim Student Association at UCLA hosted a vigil to commemorate the lives of Yusor Abu-Salha, her husband Deah Barakat and her sister Razan Abu-Salha. These three Muslim students were shot execution-style by their white male anti-theist neighbor in their home in a hate crime.

They were students like us, and like many in our communities – Muslim students our age who were involved in their campus MSA, who volunteered for the organizations we volunteer for, who lived lives similar to ours. When a tragedy hits this close to home, two questions emerge: “What if it was me or one of my loved ones?” and “How could this happen?”

It could easily have been one of us and the reaction of the public and mainstream media indicates that if it was, the incident would not get the coverage it needs. When media does cover it, there are still doubts about whether the victims’ identity could possibly have played a role, whether racism was a factor or whether there are other forgiving factors that justify the crime. When people of color are killed like this, this cycle of normalization occurs in public discourse, either justifying the crime or vilifying the victim’s character or both. In this case, it was reduced to a parking dispute. In other instances where black and brown lives have been taken, it was a hoodie, a toy gun, loud music, jay walking, “threatening” presence and so on and so forth. If that isn’t sufficient, the character of the dead is brought into question as if to ask, “Maybe they deserved to be killed?” This cycle of ignorance creates an atmosphere that allows for these hate crimes to occur and go unrecognized for what they are, racialized acts of violence.

How could this happen? There is a culture of anti-Muslim hate that is perpetuated in the small things – the microaggressions, the jokes, the movies glorifying violence against us, the shows dehumanizing us, the cartoons satirizing us. A cursory glance at the anti-Muslim incidents just at UCLA in the past couple of months shows what that culture consists of on a day-to-day basis. When Muslim students called to prayer during the MSA West Conference last month, we were recorded and harassed by right-wing extremists, who then used those recordings to fearmonger on social media. This fearmongering went as far as the university having to make a public statement defending the call to prayer as a one-time event. During the UC Student Association meeting last week, Muslim and pro-divestment students were called terrorists and recorded by anti-divestment students without their consent. Statements yelled at us included, “End Shariah law on campus!” and “UCLA is a breeding ground for terrorism.” On top of this, there have been countless incidents of hateful comments and acts against Muslim students and those perceived to be Muslim: a Muslim student got her headscarf pulled off her head at a UCLA football game two years ago; a non-Muslim Middle Eastern student got called a “fucking terrorist” while sporting a beard and a keffiyeh; countless professors continue to make insensitive and condescending remarks about Muslims and Islam in the classroom, marginalizing their Muslim students and spreading misinformation to non-Muslim students.

This is a culture of anti-Muslim hate. It dehumanizes Muslims and brushes aside our concerns about anti-Muslim hate in the day-to-day as irrational – so often have we pointed to the little things that make up this culture and so often have we been brushed off as paranoid killjoys and incapable of comprehending the concept of free speech. But the events of just this past week – the massacre of these brilliant students, the suspected arson at a mosque in Houston, the assault on a Muslim family, the murder of a Muslim man, the attack on a Muslim school, the vandalizing of another school just this weekend – show that it is more than just paranoia. The fear Muslim students feel for ourselves and, more importantly, our loved ones who might be targets of yet another hate crime is valid and justified. It isn’t enough to stand in shock and horror in vigils if, outside of that shock, we don’t actively work toward dismantling the culture that makes such a massacre possible. Any one of us could be next, and it is with a heavy heart that we ask, is that what it is going to take for the UCLA community to take our concerns seriously?

Originally published in the Daily Bruin.