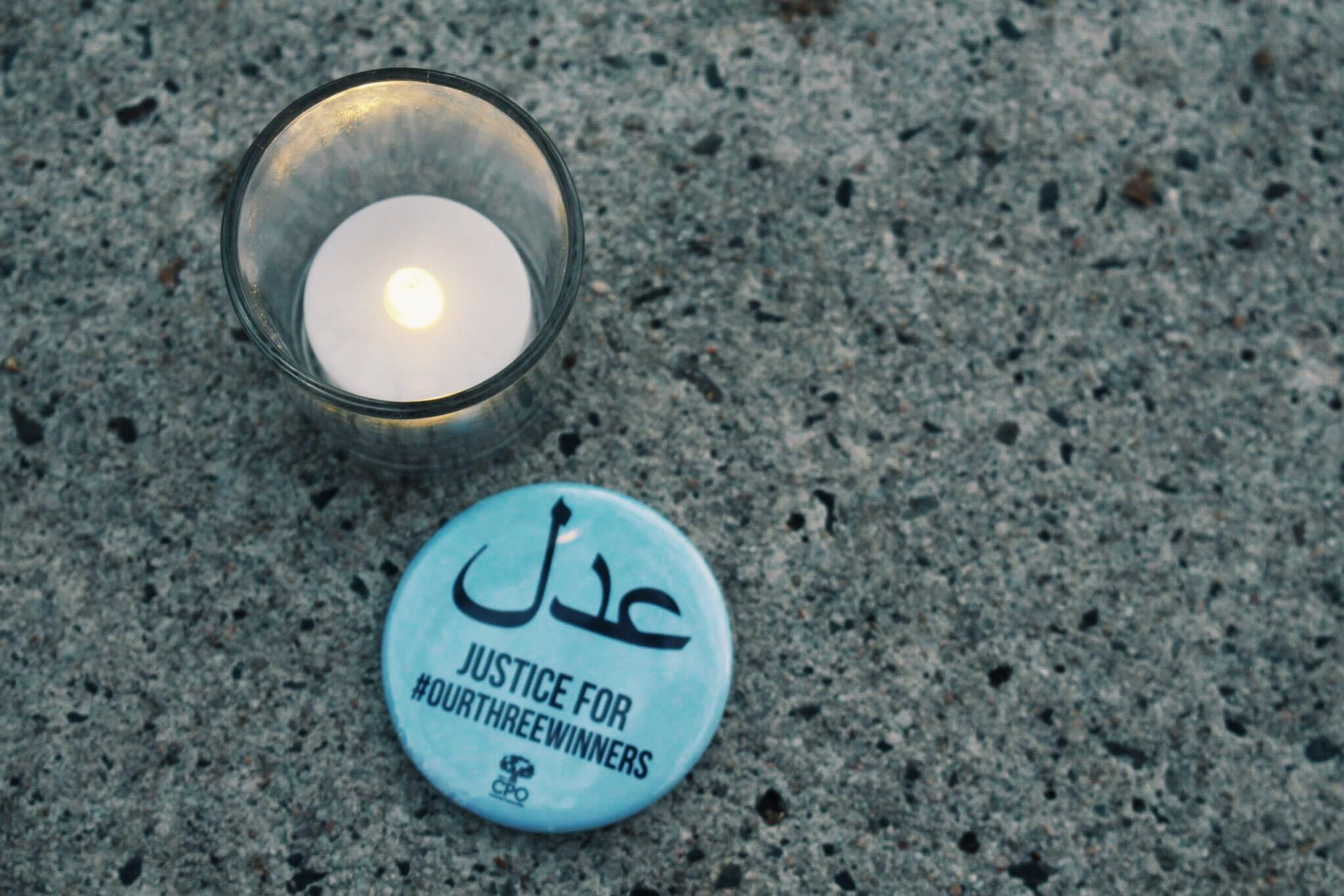 For the past week, those three names have been ingrained in our minds. Almost every aspect of their lives has been shown to us through social media. By now, most of us feel like we knew Deah, Yusor, and Razan like they were our close friends. Those three names are a reminder.

As young Muslims growing up in our respective communities across America, we have always been cognizant of the anti-Muslim hatred that surrounds our lives. Whether it be the stares at the supermarket or the blatant foul words coming from an angry driver, it’s something that we have become accustomed to. But with all that in mind, we always remain hopeful that with our actions and contributions to this society we can demolish that sick hatred.

This is what Deah, Yusor, and Razan set out to do. Just glancing at Deah’s profile, you can see how he relentlessly gave back to his local homeless community and worked on projects to provide dental care for Syrian refugees in Turkey. They lived with the belief that demonstrating their Islam in their actions would reveal the true beauty of their religion to those who believed otherwise.

Then, they were murdered. Shot execution style. In their own home on a regular evening by a hateful neighbor. But they were on the right track weren’t they? They were doing good to dispel this anti-Muslim hatred weren’t they? What went wrong then for their neighbor to shoot them? Nothing. Because that exact anti-Muslim hatred cannot be dispelled by “good” actions. No matter what Muslims do to show to this culture of anti-Muslim hatred that they are human beings, it isn’t working. The fact that we even have to prove to people that we are humans and not violent animals like we are always portrayed to be is a whole another level of problematic. When we do “prove” our humanity, it won’t work because we can never be the model citizens unless we renounce our religious beliefs. We might be the best doctors, most passionate lawyers, or the most creative artists, but we’ll never meet these ridiculous and unjustified standards set upon the Muslim community. We are expected on a daily basis to apologize for the barbaric image of Islam that has been constructed in several ways.

The hypocrisy is clear. When the Charlie Hebdo attacks occurred, we were expected to apologize for the actions of a few that apparently were representative of the more than 2 billion Muslims across the world. Yet when three Muslims were murdered, there were no calls for apologies. Instead, we simply called for a just coverage so the world would be aware that three lives were lost out of a terrifying and hateful sentiment. We called for justice.

It is saddening that our minds have become numb to these occurrences. It didn’t come as a surprise that following the Chapel Hill shooting, more Islamophobic acts ensued including various desecrations being made to mosques around the country. It has become a norm for Muslims to fear for their lives. We grow up with our parents telling us that we have to be careful of what we say and do in public, lest someone harms us for choosing to believe. We grow up with notion that we are never entirely safe and accepted; we are always the foreigners. Even when we choose to overlook the steadfast Islamophobic beliefs and to demonstrate the good in our religion, we are jolted back to reality when an occurrence like this one comes by. We don’t feel safe.

The response in our Muslim community to this injustice was astoundingly beautiful. As vigils honoring their lives have sprung across the nation, MSA UCLA held its one as well last Thursday evening. The solidarity that our own Muslim community saw from other communities who face their own systematic struggles was even more encouraging because we saw that we are not alone in our battle. It is with that solidarity that our Muslim communities continue to withstand the negativity that surrounds our identities each and everyday.

I am scared. I am scared to walk to school. I am scared to even be alone in my apartment now. I am scared to aspire to be someone great because of these hateful barriers that might come my way. I thought that doing “good” would protect me and apparently it doesn’t. As a hijab-wearing Muslim woman, it is exhausting that for the past 8 years of my life while wearing the hijab I have only been working to prove that I am not a monster when in fact I shouldn’t have to initially. I shouldn’t have to fear that the first thing someone will think of me is all these negative connotations of what it means to be a Muslim.The efforts of thousands of Muslims across this country to reach out to and break the barriers of this anti-Muslim hatred are constantly diminished when in an instant some terrorist attacks happen that many believe were planned out by every Muslim around the world. It becomes discouraging to be surrounded by such hate and inhumanity. To what point can our community live amongst such intimidating sentiments?

Deah, Yusor, and Razan weren’t discouraged as I am when they lived through this hatred. They were hopeful that change would come if they continued to live through Islam. They died working to make our Muslim communities better and I do not have the right to hinder their work and dishonor their lives by choosing to let this anti-Muslim hatred take me down. As hard as it is to walk to school everyday, it’s an effort that I have to make to preserve their legacy and construct my own. Yet this doesn’t mean that this anti-Muslim hatred can continue unchecked. Our lives are as important as every other citizen in this country and that means that our voices must be heard.

Islamophobia is alive. It’s a real thing. It can’t be forgotten. But so can’t Deah, Yusor, and Razan and all that they did for us to combat this structural violence. Their memories are still alive and their names and legacies will continue to echo in our minds and hearts.

Rest in Power Our Three Winners.

Allah Yerhamkoum. May Allah bring mercy upon your beautiful souls.