Full Circle: A First Generation Student’s Journey to the Field of Public Health 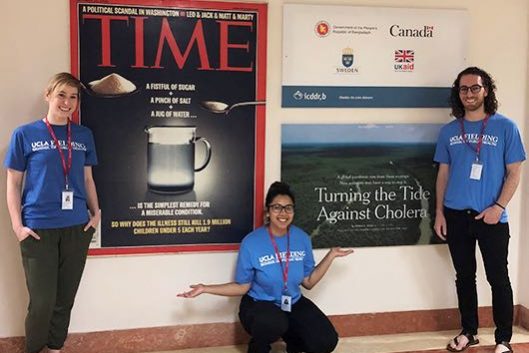 When a first-year student in college decides to pursue in a degree in medicine, he or she usually picks a degree within the biological sciences and physical sciences (US News Report). While those degrees do help for studying for the MCAT and trying to get into medical school, there is often one field that is often viewed as an extra degree and stereotyped as a failure pathway field for pre-medical undergraduates, Public Health. Public Health is not just a useful degree for medical professionals, but the work that public health professionals help the health of entire populations. Whether it be through studying how a disease spreads or understanding the health disparities of populations, it is a field that helps physicians and people. The story of 2nd year Master of Public Health student Marufa khandaker proves that Public Health should be a field worth studying for undergraduates and a prerequisite for physicians.

Marufa’s journey to public health started out as a Bangladeshi, first-generation Neurobiology, Physiology, and Behavior pre-med student at UC Davis. She struggled a lot in her undergraduate classes – struggling to a point where she was placed on academic dismissal and probation a number of times. However, a lot of that came from the fact that she did not have many of the advantages that her classmates had due to coming from a socioeconomically-disadvantaged background and low-performing high school, such as an abundance of advanced placement classes in her high school, research and volunteer opportunities in the field of medicine at an early age, or even just rigid study habits to excel in her classes. Also, due to her being a first-generation student, she had to navigate the standardized testing, college application, and college course selection process by herself and without adequate resources, just like many other first-generation students. Those factors contributed to her poor performance, and led her to question her own abilities and assess exactly how disadvantaged she was as a student. Eventually, she answered many of those questions by taking a Chicano studies course, Comparative Health.

That course exposed the disadvantages that her parents were experiencing, as Bangladeshi immigrants with limited college education. By introducing topics such as health disparities, her professor illustrated the disadvantages and limited lifestyle opportunities that individuals like her parents, minorities and low-income, experience. These discussions helped Marufa understand the context of her upbringing, and the challenges she faced as a high-schooler and college student. Determined to break out of the toxic cycle and challenge the injustices that immigrants and their children faced, Marufa became motivated to perform better in school. She actively began noting her obstacles, such as poor time-management skills, weak study habits, and impractical course-loads. She also assessed her weaknesses, and decided that her strengths lied in coursework she felt more passionately about – Psychology and Public Health. Therefore, she changed her major to Psychology, and made a conscious effort to change her lifestyle and study habits. Challenging stigmas associated with seeking help, she also started utilizing on-campus counseling services. Eventually, she was placed on the Dean’s List of her college for her academic achievements.

Coupling her newfound passion for Public Health with her old love for medicine, she also volunteered her time to help people in similar circumstances that she went through. She interned in Shifa Clinic, which was a free, student-run clinic based in Sacramento, where she would check patient vitals, charted patient histories, as well as provided health education to individuals who did not have insurance, similar to her parents. She later went onto become involved with competitive medical internships, such as the UC Davis Medical Center Emergency Medicine Research Associate Program, and held multiple research assistant positions in topics relating to mental health and public health, like the Asian American Center on Disparities Research. Marufa also became heavily involved with helping UC Davis students in reaching her academic potential, by advocating for their needs as an Academic Affairs Commissioner for the UC Davis student government, as well as leading the MSA mentorship program – the Muslim Academic and Professional Development Program. She eventually became a recipient of the 2014-2015 Academic Affairs Commissioner of the Year Award and the UC Davis 2013-2014 Bronze Community Service Award.

Her passions for immigrant and global health brought her to the UCLA Fielding School of Public Health, where she had the opportunity to be a Graduate Teaching Assistant for the undergraduate Developmental Psychology course, a Mentor for the UCLA Community Health Sciences Peer Mentorship Program, and she received the 2018 Dean’s Global Health Fellowship for her research in Bangladesh. With a strong desire to study Bangladesh’s fragmented healthcare system and Dhaka’s urban slum populations, she is conducting formative research to assess how slum households can utilize the Urban Health Atlas, an interactive website that shows the locations and details of the services of different healthcare service providers in Bangladesh, to improve their health-seeking behavior.

Through her trials and tribulations of her first undergraduate years, Marufa Khandaker was able to pave a new path that other undergraduates may follow. Her disadvantages not only made her a champion in the world of Public health, but helped utilize her knowledge in public health to make a difference medicine as well. Proving that Public Health is not a useless degree and should be a field worth studying for both undergraduates and physicians.