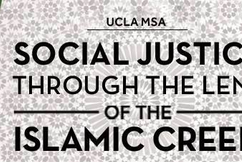 Every time we log onto social media, more often than not we see that Muslims are the problem.  It is dismaying, but we cannot remain passive. God Almighty placed us all on this Earth with a mission to spread peace and worship Him, and we will fail that mission if we continue to live apathetically and individualistically. Dr. Hatem Bazian beautifully shared 8 principles and reminders we must live by in order to fulfil our purpose and Islamically-rooted duty to social justice.

1. Commitment to Universal and Indivisible Justice

Allah swt is Al ‘Adl, the Just. It’s simple; we cannot call ourselves Muslims who worship God if we are not committed to justice. Allah swt is Al Rahman, the Merciful. Any mercy we see on this earth is a reflection of the mercy of Allah swt. And Allah swt Al-Khaliq, the Creator. When we look at all of the creation we are pointed to source, the Creator. Spreading mercy and establishing justice are commanded of us in the Qur’an. And that justice must not be solely for ourselves. It must be universal. We need to be brave in combating justice EVEN if it is against our own selves. Our tradition is rooted in justice, and the rest is commentary. For example, in surat Al Rahman, we are taught about balance. That balance is achieved through justice.

2. Profession of Equality to All Human Beings

Allah swt purposefully created us into different nations and tribes, and He instructed us to know one another. Our beloved Prophet pbuh stated that a racist person is one who is in a state of jahiliyyah, or ignorance. As darkness is simply the absence of light, ignorance is the absence of knowledge; the absence of the guidance of God. Additionally, the concept of “brotherhood” isn’t just brotherhood among Muslims. While Muslims are brothers and sisters in belief, ALL of mankind are brothers and sisters in humanity. Many Muslims claim that they are not racist, yet act in racist ways. In our religion there is no room for ethnocentrism or pride in matters out of our control. Dr. Hatem wisely pointed out that we can’t keep quoting Malcolm X and projecting his words on t-shirts and graphics without practicing them and living for the cause.

3. Sacredness of All Life

All the senseless killing we see around the globe and especially here at home remind us of the hadith that describes the coming of an age in which the killer will not know why he kills, and the killed will not know for what crime they were killed. Our religion teaches us that killing a human being is like killing all of humanity. Life is given to us by Al Hay, The Everliving. As such, it is sacred. RasulAllah (S) said that the life of the believer is more valuable in the eyes of God than the kabah. Yet ironically, people kill each other to make it to the ka’bah.

4. All Humans Beings are Endowed with Defined Dignity

Even if a human being commits a wrong, we do not remove their dignity. Instead, we must blame the crime. So easy and often it is for us to judge others when we are not in their shoes. We are not Allah swt, we leave the judging to Him, Al Hakam, the Supreme Judge. If God judged you the same way you judged others, what would be the consequence for you? Probably not too pretty. Prophet Muhammad phuh did not remove the adulterer’s dignity. This is a reminder for us to follow his example and continue to dignify others.

5. The Right to Freedom for All People

Freedom is the state in which we were all born. Allah swt placed in us the ability to think and reason, and thus choose right from wrong. In the Qur’an, the human being is endowed with free will. If we are given free will, it follows that we are given freedom. (I got mesmerized by Dr. Hatem’s eloquence and forgot to keep typing, so pardon this short section)

6. Opposition and Removal of Oppression

There needs to be a commitment in each of us to the opposition and removal of oppression. We cannot waste our lives living for the pleasures of this world and ignoring the injustices around us. We can start with our local communities. We must remind ourselves that we are not living for this world and that our mission is to spread peace and correct ills we see. Ignoring or contributing to injustices will be a darkness for us on the day of judgement. Every person will be put before God and asked for the crimes they committed. Watching in silence constitutes crime as it puts us on the side of the oppressor. We will be asked for what we could have done, so let us work for this before it is too late.

There are those who try to equate Islam with capitalism. This is false. We live in a time and place where success is measured by materiality, but that is not what Islam teaches us. Allah swt tells us that he is Al Razzaq, The Provider. We must not hold onto wealth stubbornly or fear that it will go lost because Allah swt is the source of all wealth and success, and this reservoir of His is limitless. This is a major contradiction to Adam Smith’s “World of Scarcity” or “Survival of the Fittest” model in which resources are limited and we must compete for wealth, working individualistically. Islam emphasizes the importance of the collective, the mercy that must exist within the community and the aiding of the poor. Zakat is wonderful. If the entire world paid 2.5% of their wealth in zakat, there would be no poverty or hunger. Yet the thought of donating this sum annually sounds threatening to some. Ultimately, if you think of God as a God of scarcity, you will find scarcity. But if you trust that He is a God of generosity, you will find His generosity and the sums that you give will return to you and then some.

8. Militarism is Not Divine

Power is given to an individual as a byproduct of serving Allah swt. It shouldn’t be pursued or competed for. Self defense is much more different than structural systems built to kill and combat. We cannot replicate the imperial structure in order to defeat it, and the ends do not justify the means. Those that worship themselves are the ones that want to see their own success and triumph. We see this today with the various national militaries that transgress moral boundaries and claim countless lives in their quest for power. “Collateral damage” is the cover-up term given to mask the reality of the situation: murder of innocents.

May we keep these points forefront in our minds and use what time we have in this world to change it and ourselves for the better. Ameen.

Prof. Hatem Bazian received his Ph.D. in Philosophy and Islamic Studies from the University of California, Berkeley. Prof. Bazian is a co-founder and Professor of Islamic Law and Theology at Zaytuna College, the 1st Muslim Liberal Arts College in the United States. In addition, Dr. Bazian is a senior lecturer in the Departments of Near Eastern and Ethnic Studies at the University of California, Berkeley. Dr. Bazianbetween 2002-2007, also served as an adjunct professor of law at Boalt Hall School of Law at the University of California, Berkeley. He teaches courses on Islamic Law and Society, Islam in America: Communities and Institutions, De-Constructing Islamophobia and Othering of Islam, Religious Studies, and Middle Eastern Studies. In addition to Berkeley, Prof. Bazian served as a visiting Professor in Religious Studies at Saint Mary’s College of California and adviser to the Religion, Politics and Globalization Center at UC Berkeley. In Spring 2009, Prof. Bazian founded at Berkeley the Center for the Study and Documentation of Islamophobia, a research unit dedicated to the systematic study of Othering Islam and Muslims. Prof.Bazian in Spring 2012 launched the Islamophobia Studies Journal, which is published bi-annually through a collaborative effort between the Islamophobia Research and Documentation Project of the Center for Race and Gender at the University of California at Berkeley, the Arab and Muslim Ethnicities and Diasporas Initiative for the School of Ethnic Studies at San Francisco State University; the Center for Islamic Studies at the Graduate Theological Union, the International Centre for Muslim and non-Muslim Understanding at the University of South Australia, and Zaytuna College. Dr. Bazian is founder and national Chair of American Muslims for Palestine and serves on the Board of Directors of Muslim Legal Fund for America and Islamic Scholarship Fund.