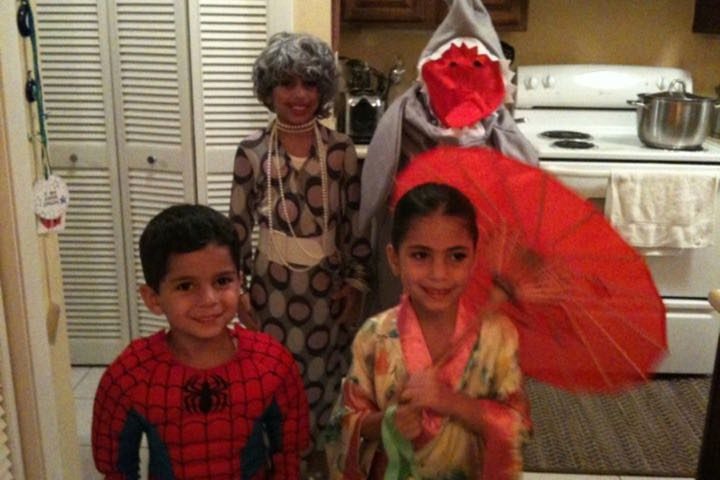 Picture of my siblings and I in Halloween costumes

There’s nothing like Autumn. The color of the leaves turn to a warm amber. The days begin to feel shorter as the weather gets colder. Pumpkin spice invades every possible product, and of course, people are getting ready for Halloween. In America, Halloween has become a cultural staple, being the second most commercially successful holiday after Christmas. It is expected that annual spending for Halloween this year will be about $9 billion with over 175 million Americans spending on average $86.79 each. 95% of the $9 billion dollars ($2.6 billion) will be spent on candy, according to the National Confectioners Association. Candy-manufacturers reap 8% of their annual sales during this season, making Halloween candy’s biggest holiday. But it might be a little harder for corporations to break into the Muslim American market due to contentions as to whether or not celebrating this holiday is permissible under Islam. As with many issues that aren’t explicitly stated as halal or haram in the Quran, the choice to celebrate comes down to everyone’s personal Sharia. For my family, they permitted me to dress up in costume and trick-or-treat during Halloween. But I knew other kids had to rely on their friends’ donations to get their Halloween candy fix.

I had a very unique childhood. I grew up in Dhahran, an American compound within Saudi Arabia that still had a strong Arab presence. It’s a one of a kind microcosm with a unique synergy between American and Arab lifestyles that mutually coexist with one another. From the outside, the compound appears to be a normal American suburb, but within the confines of the homes exists an Arab presence. Although no exact statistic exists, in my experience, I believe Dhahran has a 60:40 ratio of Arabs to Americans. Growing up there had a huge effect on my identity since I could not wholly identify as either Arab or American, but rather as a combination of the two different worlds. Because of the large American presence on the compound, many homes celebrated the holiday which allowed many of us to trick-or-treat. Meanwhile outside the compound, people weren’t even aware of such a holiday existing. Every year my friends and I were able to experience Halloween in Saudi Arabia, albeit with some controversy among some other Muslim families. As the holiday approached, the pumpkins and skeletons would line the walls of my elementary school and the debates would begin on whether celebrating Halloween is haram or halal. The debates were vicious, usually ending in a shouting match between the two opponents.

As a kid, when I would hear people claim that Halloween was indeed haram, it caused me to panic. Apart from Eid al-Adha and Eid al-Fitr, Halloween was the only holiday I celebrated. It was the only time of year I was allowed to gorge on unhealthy amounts of candy until I never wanted to look at a Snickers bar ever again. When I asked my mom, she reassured me that there was nothing haram about trick-or-treating and that I need not worry. Extremely relieved, I would trick-or-treat with my friends every year and enjoy the wonderful feeling of being a carefree child, sharing candies with each other in the dead of night. However, I stopped trick-or-treating when I became 17 years old; I opted instead to buy bags of candy and watch movies with my friends. I suppose it was a part of becoming a boring adult. However, after eight years of trick-or-treating, I wanted to look deeper into whether Halloween was haram or halal as I could no longer rely solely on my mother’s reassurance.

Halloween has its roots in ancient Celtic pagan practices. Its origins date back over 2,000 years ago to the holiday known as Samhain Eve. The Celts believed that on the sacred night of Samhain, “spirits…walk[ed] the Earth as they traveled to the afterlife. Fairies, demons, and other creatures were also said to be abroad” and that they “often wore costumes—probably animal skins—to confuse spirits, perhaps to avoid being possessed.” Now there is no questioning that in Islam, paganism (Shirk) is one of the biggest sins a Muslim can commit, and thus, at first glance this would seem to settle the fact that participating in Halloween is haram. Furthermore, many Islamic advice websites have published statements that due to Halloween’s roots in a pagan religion, it is unquestionably haram. “From an Islamic standpoint, Halloween is one of the worst celebrations due to its origins and history. It is Haraam (forbidden) to partake in such a practice, even if there may be some seemingly good or harmless elements in it” says IslamWeb. Alongside a hadith from Bulugh al-Maram that is consistently quoted on Islam forums regarding Halloween, “He who imitates any people (in their actions) is considered to be one of them,” thus supporting the argument that those who partake in Halloween celebrations are part of the pagan religion.

However, these arguments lack perspective on modern day Halloween and what the holiday stands for today. To quote a relevant hadith from Sahih al Bukhari, “[v]erily actions are by intentions, and for every person is what he intended. Verily, every person will have only what they intended/” If intention (Niyyah) is the most important deciding factor in determining the morality of an action, then we must consider this when deciding whether or not wearing a costume and going trick-or-treating is haram or not. Today, said activities are done by many with the intention of bonding with friends rather than worshiping a spirit. To say someone is secretly performing paganism is to project assumptions onto those who have done no wrong–those with no intention of performing shirk. You can’t say they’re unknowingly practicing it because the essence of practicing shirk lies in deliberately believing in it. So when we look at modern-day Halloween, we must ask ourselves, “How many people even know about its history in America?” Certainly kids don’t. To almost everyone today, Halloween isn’t about paganism. It’s about kids dressing up in costumes and collecting unhealthy amounts of candy. That’s why intention is so important when living in a non-Islamic culture and inherently being exposed to traditions or customs that are non-Islamic in origin.

The assertion that participating in a culture makes you one of “them” as opposed to being a part of “us” on its own carries some worrying connotations. It firstly adopts a conformational view of “the other;” that they are not one of us and we are not one of them. Edward Said writes that this “dichotomous” thinking leads to having an Islamic identity becoming “an act of nearly cosmic defiance and a necessity for survival.”1 Participating in a culture doesn’t mean losing your own. Cultures aren’t solitary; they are fluid and interact constantly with others around it. Because of this, celebrating Halloween doesn’t necessarily make anyone less of a Muslim just because it is a secular holiday.

Finally, to those still not convinced that celebrating Halloween is not secretly performing paganism, Halloween traditions in America are purely secular in origin to begin with. While it has existed with the Celtics for thousands of years, it was not until mass Irish and Scottish immigration in the 19th century that Halloween became a major holiday in America. “[I]t was gradually assimilated into mainstream society and by the first decade of the 20th century” and has since been celebrated by people of all social, racial and religious backgrounds. So to believe that in America it still holds pagan connotations would be a fallacy. Holidays like Thanksgiving and the Fourth of July may have been introduced by Christians, but they are not generally celebrated as a Christian holiday by the public.

Regardless, there will be differing views on Halloween, and it is not wrong to opt out of celebrating it. But personally, it is quite disheartening to see children berated as being bad Muslims for trick-or-treating with their friends and family. Halloween was a big part of my childhood; it takes me back to an innocent time where I only cared about being with my friends and collecting as much candy as possible. Although it is ultimately up to the family’s decision, I don’t think Muslims in America should be stripped of this experience because of certain perceptions of Halloween and what it stands for. I think that for many kids today, the memories of trick-or-treating are some of the most fondly looked upon memories, and for that Muslims of today shouldn’t be bashed for trick-or-treating. Whether you choose to celebrate this holiday or not, those who do should not be viewed as unknowingly participating in shirk for creating the same childhood memories that I hold dear.