Editorial: Islamophobia, Intimidation and other distractions at USAC Divestment meeting 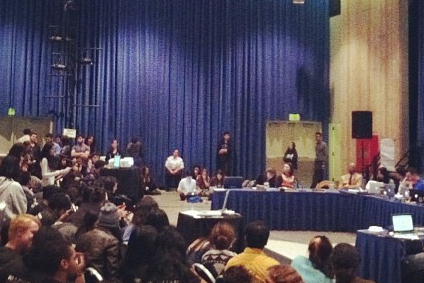 Correction: The original version of this article contained an error and has been changed. UCLA Iranian Student Group neither supports nor opposes the divestment resolution

On Feb. 26, USAC voted 5-7-0 against “A Resolution to Divest from Companies that Violate Palestinian Human Rights” brought forth by Students for Justice in Palestine (SJP). The bill, sponsored by council members Lizzy Naameh, Armen Hadjimanoukian and Omar Arce was rejected after a lengthy 12 hour meeting in Ackerman Grand Ballroom. Over 500 people attended and more than 200 students/alumni spoke on behalf of their beliefs. 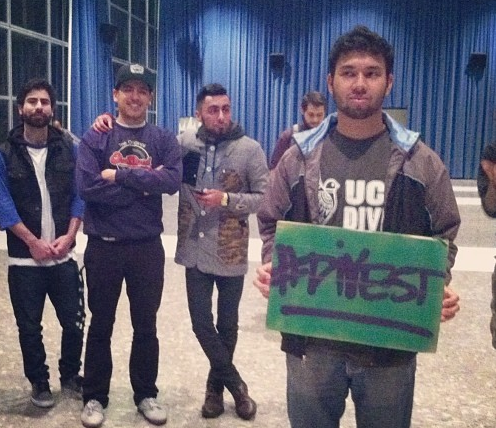 It was disheartening to witness the rejection of this bill, for it only called upon UCLA funds to be taken out of investments that are enabling and profiting from the Israeli occupation of Palestine.

The main goal of this bill: To stop forcing Bruins to fund and profit from an occupation that is killing Palestinians in the West Bank, demolishing their homes and treating them like second-class citizens. But many last night felt otherwise.

The anti-divestment stance grew on many different platforms, few of which were actually related to the bill itself and rather focused on arbitrary and irrelevant tangents. Comments spurring from this side of the matter distracted the council members from seeing the actual cause at hand. The fact that the vast majority of comments against the bill focused on Omar Barghouti, BDS and campus climate indicated that few had actually read the resolution and were rejecting it on preconceived notions.

Any criticism of the state of Israel was dismissed as anti-Semitic, claiming that Israel is singled out when student groups on this campus continue to carry a legacy of activism against all kinds of oppression and this bill was another manifestation of that. In addition, the fallacy of relative privation, used incessantly throughout the night, is countered by Wali Kamal who explains that the fallacy suggests, “the opponent’s argument should be ignored because there are other relevant problems in the world.”

Pro-Israelis claimed that we should not be taking a stance on the geopolitical issue of the occupation of Palestine –which in fact the divestment resolution does not call for at all since it was concerned with human rights and not political solutions– yet they fell upon tangents and tangents that had no place on the floor.

The fact that this resolution was only calling for basic human rights was difficult for many to grasp. How can we morally justify that our funds as a university, partially consisting of our hard-earned tuition money that many go into piles of debt for, are funding occupation? Beyond only funding it, dividends on the investments ensure that we profit off of any profit those complicit corporations make off of human rights violations.

Palestinian students shared their family’s stories of the brutality of the occupation. The Afrikan Student Union voiced their concern about the sterilization of Afrikan women in Israel and the striking similarities between Apartheid South Africa and Israel today. Israeli Jews, grandchildren of holocaust survivors and a former IDF soldier voiced their unequivocal support for divestment. South Asian students drew parallels to the colonialism of the subcontinent and the current conflicts there and stood in solidarity with divestment. MEChistas drew similar comparisons to their own struggles in the United States and Tlaloc Vasquez, speaking on behalf of MEChA de UCLA, said that National MEChA has endorsed divestment as a strategy for Palestinian resistance. Denise Panaligan, speaking on behalf of IDEAS, stated that the organization stood behind SJP’s call to divest. These were joined by many others, including representatives from the Armenian Students Association, the Incarcerated Youth Tutorial Project, Mentors for Academic and Peer Support, Samahang Pilipino, Muslim Students Association, Bruin Feminists for Equality, United Arab Society, Pakistani Students Association, Student Collective Against Labor and Exploitation and Coalition Against Napolitano. Additional endorsers of the bill included the United Afghan Club, the Muslim Law Students Association, the Sikh Student Association among others.

Students of all backgrounds were united in the cause of the Palestinian struggle for human rights. 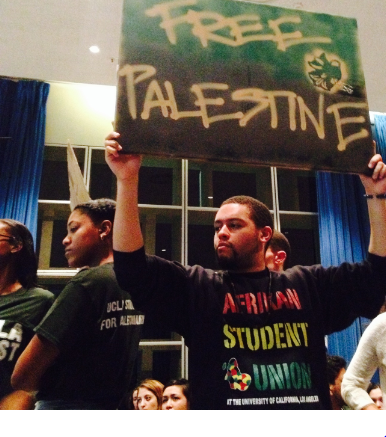 Islamophobic comments were plenty and cheered on by many in opposition of the bill, and the question remains: Why did no one stop hate speech against Muslims when the primary concern against this resolution is campus climate?

After many Islamophobic, racist, sexist and homophobic comments, Muslim Student Association President Neyamatullah Akbar noted in his public comment that dialogue will not solve this issue because there is a basic lack of respect for Muslims, saying, “Today when that man came here and spoke, and I will quote, at 12:02 am he said, ‘Israel will exist and continue to exist until Islam will obliterate it as it has obliterated others before.’ At 12:03, ‘If Israel would put down its arms and disband its military, you would have Israelis made into fish food as they are pushed into the sea by radical Islamic terrorism.’ John, Avi, as senior leadership on this council, I expected you to stop that because that’s not freedom of speech, that’s hate speech.”

Many claimed this to be a divisive issue that would harm campus climate. Marginalized groups have explained that campus climate is “not all roses and butterflies” right now, as shown in the blatant, celebrated and unchecked racism that was tolerated by USAC senior leadership on our campus that evening. Commenting on the notion that a bill like this would be divisive, many remarked that this bill actually unified dozens of communities and that every major move toward progress and equality was considered divisive throughout history. Nevertheless, it was the right thing to do.

USAC’s failure to pass this bill showed clearly that some lives are valued more than others and that Palestinians continue to be considered second-class citizens who are effectively forced to fund violence against themselves. That is divisive.

The right-wing Zionist group StandWithUs sent a representative to peruse his way to the front of the ballroom to film seven hours of footage of the public comments and take pictures of people, without announcing it to anyone and without any student’s consent. When called out by council member Savannah Badalich, the man stated that he is with a “company” called StandWithUs, effectively misinforming the students since the organization calls itself a non-profit. The organization is known to take videos of people speaking up against divestment without their consent to use in training videos against divestment.

Soon after public comments ended, SJP and Bruins For Israel (BFI) briefly presented, and USAC President John Joanino called for a straw vote to assess who would vote on the resolution as it is now. The result reflected the ultimate outcome, 5-7-0, and during a later straw vote, only 5 council members said they would pass this resolution even after amendments. Hence, it remains unclear why Internal Vice President Avi Oved was so adamant about addressing that SJP had not consulted the other side in drafting this, when no version of a divestment resolution would have been accepted. SJP had continuously reached out to Hillel and BFI communities since the beginning of the quarter and was ignored until very recently.

The fact that Palestinian students are forced to consider co-writing a resolution that deals with their community and their right to justice speaks volumes about their status as second-class citizens on this campus. No other community is held to a standard in which they have to negotiate their basic human rights with proponents of their oppressors.

The strongest argument on the side of BFI was that Avi Oved’s resolution “A Resolution In Support of Positive Steps Towards an Israeli-Palestinian Peace” was struck down on grounds that pro-Palestinian communities were not consulted in its writing and on grounds of consistency, therefore, USAC should reject this resolution because pro-Israel communities were not adequately consulted (despite the fact that they explicitly stated that they would not accept divestment in any way, shape or form). The fundamental difference between the two resolutions at hand is that Oved’s resolution purported to be about dialogue between two communities (and only consulting one side of the dialogue in the drafting) while seeking to preemptively undermine any future divestment efforts, while this resolution deals with primarily Palestinian human rights, violated by Israel and funded by our money.

This issue affects the Palestinian community and no oppressed people need to ask the permission of their oppressors to resist.

The opposition also frequently brought up the argument that this resolution would undermine Jewish right to self-determination. After 9 hours of public comment and 3 hours of council debate, there has not been one clear explanation as to how a people’s self-determination is contingent upon the services of foreign corporations and why that self-determination should come at the cost of lives and human rights violations of another group.

After council rejected the resolution, notetaker Danielle Dimacali addressed council to voice her disappointment with the council’s failure to do the right thing. A video of her tearful and passionate address has gone viral on the internet and caused a lot of harassment. A right-wing blog that equates BDS with the Holocaust called the Legal Insurrection shared the video online and contributed to its dispersion throughout the internet.  Nevertheless, Dimacali’s address echoed a larger sense of disillusionment with the council’s decisions and showed how many people of various backgrounds were disappointed with council that night.

USAC was given a chance to take an incredible step towards justice and equality and decided to value the noise of a few over truth. As mentioned in public comment, the movement to divest will come back over and over again and so it remains a question of “when”, not “if.” The status quo of human rights violations against Palestinians will change with the hard work of all of those who stand in solidarity with the movement. The only ones that have to live with the nay votes are the council members themselves because when given an opportunity, they chose to stand on the wrong side of history.

Council member Maryssa Hall asked, “If not us, then who? We attend one of the most prestigious universities in the world. If we don’t stand up for human rights, especially if we are directly involved, who will?”

This night may have showcased a multitude of injustices, but there was beauty in the unity and solidarity of numerous organizations on campus fighting for justice and human rights. Communities on campus were empowered and mobilized through this and will continue to fight until justice is served.

“As leaders, you cannot blindly follow. As Bruins in the UC system we are taught time and again to think critically. It was not easy to pass divestment for South Africa, it was not easy to advocate for desegregation in America. I’m sure as hell it hurt some feelings, but it was the damn right thing to do.”