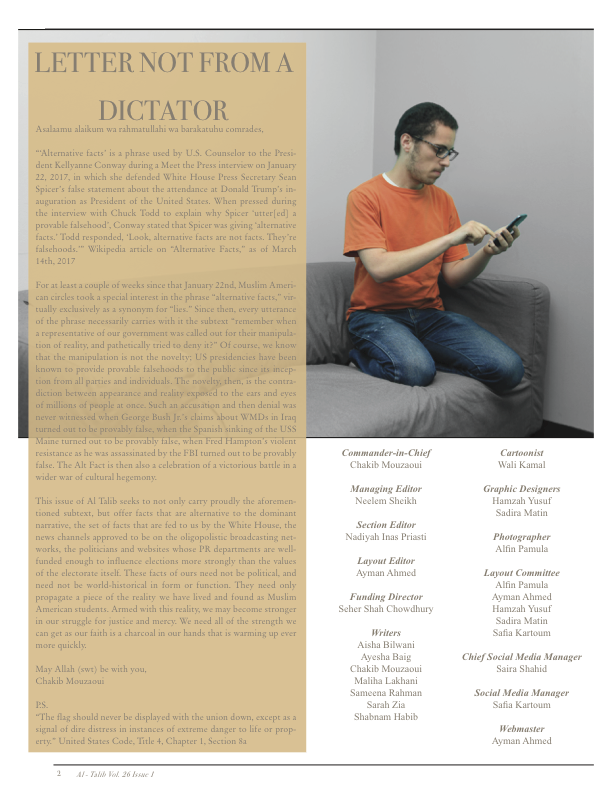 “‘Alternative facts’ is a phrase used by U.S. Counselor to the President Kellyanne Conway during a Meet the Press interview on January 22, 2017, in which she defended White House Press Secretary Sean Spicer’s false statement about the attendance at Donald Trump’s inauguration as President of the United States. When pressed during the interview with Chuck Todd to explain why Spicer ‘utter[ed] a provable falsehood’, Conway stated that Spicer was giving ‘alternative facts.’ Todd responded, ‘Look, alternative facts are not facts. They’re falsehoods.’” Wikipedia article on “Alternative Facts,” as of March 14th, 2017

For at least a couple of weeks since that January 22nd, Muslim American circles took a special interest to the phrase “alternative facts,” virtually exclusively as a synonym for “lies.” Since then, every utterance of the phrase necessarily carries with it the subtext “remember when a representative of our government was called out for their manipulation of reality, and pathetically tried to deny it?” Of course, we know that the manipulation is not the novelty; US presidencies have been known to provide provable falsehoods to the public since its inception from all parties and individuals. The novelty, then, is the contradiction between appearance and reality exposed to the ears and eyes of millions of people at once. Such an accusation and then denial was never witnessed when George Bush Jr.’s claims about WMDs in Iraq turned out to be provably false, when the Spanish sinking of the USS Maine turned out to be provably false, when Fred Hampton’s violent resistance as he was assassinated by the FBI turned out to be provably false. The Alt Fact is then also a celebration of a victorious battle in a wider war of cultural hegemony.

This issue of Al Talib seeks to not only carry proudly the aforementioned subtext, but offer facts that are alternative to the dominant narrative, the set of facts that are fed to us by the White House, the news channels approved to be on the oligopolistic broadcasting networks, the politicians and websites whose PR departments are well-funded enough to influence elections more strongly than the values of the electorate itself. These facts of ours need not be political, and need not be world-historical in form or function. They need only propagate a piece of the reality we have lived and found as Muslim American students. Armed with this reality, we may become stronger in our struggle for justice and mercy. We need all of the strength we can get as our faith is a charcoal in our hands that is warming up ever more quickly.

May Allah (swt) be with you,

“The flag should never be displayed with the union down, except as a signal of dire distress in instances of extreme danger to life or property.” United States Code, Title 4, Chapter 1, Section 8a