Language is a core component of identity, the shaping of thoughts and their formation. It characterizes us and evolves with us; the complex human mind is able to switch between languages fluidly with increased mastery. Language is the first and lasting encounter with culture- we think in specific languages and most often, it is usually in the maternal language. What happens when the use of maternal languages is officially banned in educational institutions and informally opposed in social circles? When one of the most prestigious high schools in Lahore (Beaconhouse School System), Pakistan banned the use of Punjabi, the most popular regional language in Pakistan, on school grounds, classifying it as a foul language, Raina Iqbal wrote an open letter to their administration.

She recollects in an interview, “Soon after my letter was published, several groups shared it including Punjabi Perchaar, the biggest Punjabi collective in Pakistan, and London Punjabi Collective. Their organized protests and use of my work in their responses made a great change. Beaconhouse issued a second, sincere apology a day later and had also been called to the high court in order to discuss this matter. Seeing these actions taken makes me believe that my voice played a small but significant part in holding the administration accountable for their words.”

Ms. Iqbal’s letter  exploded overnight capturing great attention over social media. When asked how her work gained such momentum and how she found herself nurturing a community with a like-minded and marginalized audience, she acknowledges, “I did not expect such an overwhelming response to be honest. I had made my open letter public on Facebook, after which I was contacted by a Pakistan social media website called “Parhlo” that decided to feature my letter alongside additional information about me as a Beaconhouse Alumna. On October 16th, I woke up to a dozen calls and notifications, my friends tagging me in this post and applauding my work. To see a collected 5K+ likes and 2K+ shares of my letter in a few days was an extraordinary feeling. I felt like my voice had been heard, and that my purpose of writing a letter had been served: I am not alone. Thousands of Punjabis and Pakistanis felt this way too-that their regional language had been compromised. It gave me immense joy to see them embracing their cultural identity through a simple letter.”

Ms. Iqbal’s heartfelt letter has inspired many to speak up for their rights, and led to the rectification of an oppressive policy which was not a small feat. She did find resistance from those who believed her letter to be an attempt at marginalizing Urdu, the official language of Pakistan; however, preservation of one language does not mean the abandonment of another. 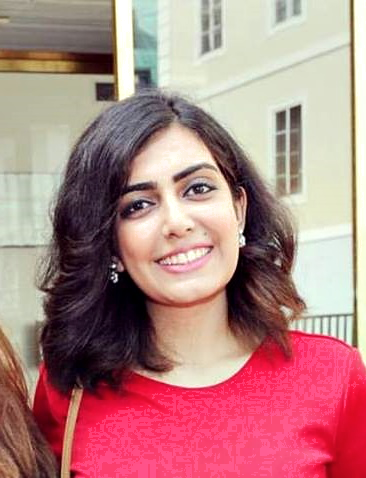 Picture Credit: Raina Iqbal. Raina Iqbal is an alumna of the prestigious private school Beacon house School System, Lahore, Pakistan. She is a blogger for Express Tribune and has worked for the Consulate General of Pakistan in Los Angeles. Currently, she is attending California State University, Northridge. Ms. Iqbal is interested in pursuing public policy and international affairs, and aspires to work in public administration in Pakistan after graduation. She is also an activist and enjoys debate. She has partaken in Matador Speech and Debate Team, as well as the Model United Nations for multiple years.

Ms. Iqbal is interested in public policy and international affairs, and hopes to pursue public administration in Pakistan after concluding her studies at California State University, Northridge. She is a member of the Matador Speech and Debate Team and actively participates in public speaking events such as Model United Nations. She is also a blogger at Express Tribune and can be found on twitter as @rainaiqbal.

It is not simply regional languages within the boundaries of nations that are endangered by more dominant lingua francas that have fast taken root as the most convenient method of official communication, mode of teaching, and marketing. Even languages that are popular and widely spoken such as French have proponents that classify these languages as endangered by the more dominant English language. The United Nations is one of the largest multilateral, international aid and peacekeeping organizations. Yet even within the UN, the Organisation internationale de la Francophonie (OIF) has concerns about the depreciating value of French even though it is one of the official UN languages. Hervé Cassan, a five-year advisor to the Secretary General of OIF, and an appointed ambassador to La Francophonie in Geneva, represented La Francophonie in the UN to preserve French language not for its colonial roots, but for the commitment to multilinguinisme, cultural diversity, and democracy. He felt, as do many French speakers, that the French language is endangered by more dominant languages such as English, and advocated for a definitive involvement of French in the UN offices. He demanded that the French language requirements should be enforced within the UN, not merely in the paperwork, but in daily organizational work. He wished to use the french language’s application in the UN as a model to demonstrate coexistence, not domination. Yet skeptics argue that French itself as a language endangers other local and regional languages especially in old French colonies such as the Democratic Republic of Congo where French is still an official language and its use is encouraged in bureaus. Mastery of French increases employment prospects where the maternal languages such as Lingala, Kikongo, Tshiluba and Swahili remain in  informal settings.

Languages and people who speak them evolve with time and natural selection occurs in this aspect of society too. The French language has paved way for development within Sub-Saharan Africa establishing a common language of communication in a very diverse country. It has invited scientific and technological mobilization for the countries it inhabits. However, if it is the cause of marginalization and infringement of liberties of the persons speaking it, the effects of language selectiveness are far more pronounced, such as in Ms. Iqbal’s case.