The Art of Marginalization or of Satire: The Enriching and Subversive 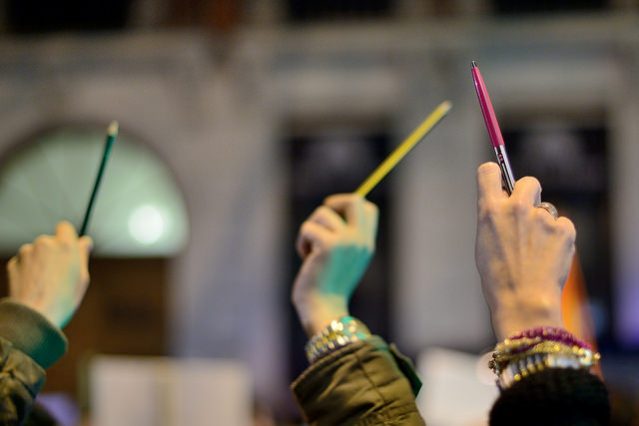 An armada of thoughts clash against the mind, march in a cadre, colorfully interweave, and ultimately find confluence, architecting the very physics of a single, untamed noise, awaiting to spill against the silhouette of the subconscious. There it knocks on the heart in a faint, muffled concerto, hoping to be heard. A stroke of the pen beckons from the other side, masterfully infusing this distant echo into paper, freezing it into the memento of experience and inquiry, thawing it with the ink that will liquify these colors upon humanity’s palette. It is this same ink that morphs impulse into action. It is this same ink that energizes, awakens, and defends society within the hilt of free speech. Behold, the ink that crafts the ongoing dynamism whetting our clarity of sociopolitical perspectives, enriching our cultural dialogue, and serving our biggest artillery against tyranny every epochal moment in history. From this ink “art” is born. And with it, a new scope of human interaction.

A peer through its immense lens invites us to a single tapestry. A single story woven by an ever evolving account of narrators, chiseled on the grindstone of emotion, and injected into the blank canvas of public discourse, for us to peel away at; for us to unveil the insightful gems locked inside. These dynamics form the linchpin of artistry, and more relevantly, of “satire”–the artistically empowering medium of free speech dated to man’s inception–a mechanism to expose vice, challenge authority, carve solidarity into the weak’s voice, and fortify truth against conformity. Under the garment of free expression, satire is the art form that has served the forefront of that vigilant, inky pen.

Satire and Speech: The “Enriching” and “Subversive.”

The cards are laid out, so let’s hit the nail. The truth is, art is a massive realm, filled with implication, innuendo, and subtlety; it’s no surprise satire steals the throne for offensives and defensives. That’s just what it exemplifies, an innocuous artillery for challenging power, protecting the weak, and brandishing the truth in the face of conformity. It’s a powerful conduit of free speech against authority in this particular fashion, circumventing censorship, and preserving the institution of expression. Clearly, that’s a brilliant weapon in the hands of the just, but a dangerous entity in the hands of the abusers. Satire merits no place in endeavors that facilitate oppression and abuse under the guise of free speech; it is a device meant to hone our social perspectives, not pique animosity and stereotypes, as aforementioned, that impel the weak.

We absolutely must then have the capacity to distinguish the “enriching,” from the “subversive,” forms of speech; the latter has forfeited all purpose to belittle the weak, rather than challenge the strong—this is the poison that errodes into the sediments of free speech, if anything, but does not emblazon it. I’d like to believe if it was harmless in the head, it should remain harmless in ink. But that’s just me.

With the recent attack on the prominent satirical magazine, Charlie Hebdo, the media has become a bastion for terror in France. The popular caricature of the Islamic prophet Muhammad (catalyzing the typical print release of 60,000 copies to now more than 7 million copies) shedding a tear and carrying the sign “Je suis Charlie,” beneath the phrase “Tout es pardonne”—All is forgiven, has flamed bitter controversies and stereotypes internationally.

Adhering to convention, many parade Charlie Hebdo as dutifully exercising its rights to free speech. But, a closer look reveals the dissonance between its history of satire and the sharp oppression of Muslims in France. In many cases, it seems this satire has become less an implement to protect the citizen’s voice, and more an arrowhead towards a highly marginalized group of individuals. For a country home to the largest Muslim minority in Western Europe, constituted by nearly 5 million Muslims, Charlie Hebdo’s satire simply lends itself to a salient, macabre cycle of abuses and hostilities facing the Islamic community in France for roughly a decade.. Now we can frame the issue in its more gestalt circumstances.

In 2010, France instituted a law that banned burqas and other face-covering veils in public. As many know, the veil is a deeply entrenched tradition and identity for many females in the Islamic culture. In France, the term “immigrant,” has morphed into a reference for ethnic minorities that fail to embrace French values and customs, and acutely in the case of Muslims, Islam has been deemed highly “incompatible,” with French values. As a result, a majority of French society marginalize and dehumanize Muslims, deeming them unworthy of “acceptance.”

Race and ethnicity, evidently, are much disregarded components of human rights in France, and continue to accentuate the mistreatment of the Muslim community. According to Stanford research conducted by David Laitin, French Muslims “face job discrimination compared to their Christian peers who receive two-and-a-half times more opportunities with equal qualifications.” But this emulsified nature of social integration doesn’t stop at alienation. In June 2013, a pregnant woman wearing the “niqab,” a form of veil, was attacked in cold blood in a neighborhood outside of Paris. According to reports, two skinheads ripped her veil away, cut her hair off, blasting Islamic-taunts, after kicking her in her hips and stomach, inducing a miscarriage for the pregnant, innocent woman. We see that the form of oppression French Muslims face, which goes largely unnoticed by French policy and public, subsume psychological, physical, and social abuse.

Now, where does Charlie Hebdo fit itself in this machinery of marginalization?

The vulnerable targets of the most vulgarly displayed innuendos–Muslims! Charlie Hebdo journalist Oliver Cyran himself recently even admitted, an “Islamophobic neurosis took over,” shortly after 9/11. And what did that do? Effectively manage to endorse attacks on a minority religion that found no asylum in the policy of France.

Borrowing from Mehdi Hassan’s point, new statesmen and political director of the Huffington Post, how often do we see the magazine run cartoons of the Holocaust or 9/11 victims. Never. However, we see sexually-lurid, vile and denigrating, and belittling portrayals of Islam to no end. Charlie Hebdo seems to have the largest artillery for the most marginalized religion and community in France, while disregarding their Christian and Jewish brethren. Coincidence? I think not. And in the face of an abrasive social context for Muslims that have existed in France, in the face of the “Islamophobic neurosis” that has lingered around, in the face of the violence, alienation, rejection of the Islamic community by a majority of French society, Charlie Hebdo can’t simply expect people Muslims to brand a “sense of humor,” as insinuated by Luzier.  It seems Muslims are simply expected to have thicker skins than the average person. Well. Glad we could toss any form of social equality out the door. Let’s stop hiding behind the façade of “satire” here. I think “dehumanization” fits the Charlie Hebdo agenda better.

Whose Hands Hold the Hilt, The Nature of Art

If anything was learned in this moment, let it be one axiom. Satire is man’s blade of free speech, wielded to expose vice and challenge oppression. However, handling such a blade does not give us the carte blanche to abuse, disparage, and marginalize groups of individuals. That “case” would render the object in hand no longer a form of satire or art, but more simply a force of dehumanization. There can be no art that dehumanizes the very creature whose flesh it originally incarnated from. And similarly, there can be no satire that taints the purpose of that very art. Charlie Hebdo is very well a jigsaw in this frame of power. But clearly, that does not extenuate its history of discrimination, corrosive stereotypes, sexually-lurid cartoons, and innuendos against the French Muslim community, which in the larger context, has been a victim of the highly acerbic legal and social conditions owed to “Islamophobic neurosis.” Recalling Aamer Rahman’s recent tweet “Satire is about challenging power, not belittling the oppressed.” Can Charlie Hebdo, then, truly brandish the name “satirical”?

Syed Bashir Hydari is a freshmen at UCLA, majoring in Psychobiology as a pre-med. Currently researching at the Jules Stein Eye Institute, and managing his own dance organization AIA (the Art of Isolation and Animation), he is immersed in the Islamic politics of Al-Talib and manages their social media. When he isn't busy, he returns to his lateral passion of teaching the fundamentals of popping and other urban styled dances to beginner dancers, writing poetry, and working with his Humanitarian Organization. He's a sucker for a good freestyle battle, sour candy, anything with numbers, and literature!