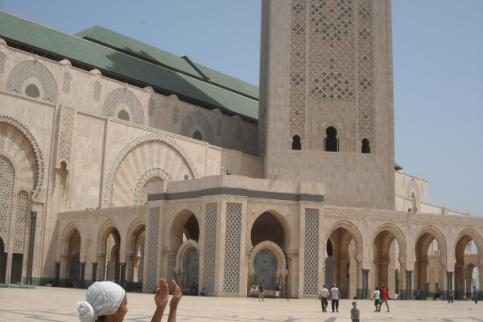 The taxi driver looked at me in a panicked state and exclaimed, “Quran! Quran!” Frantically attempting to communicate with me in Arabic, he hoped that we would at least understand each other through a commonality of faith. I nodded in agreement and felt a sense of relief.

Although we were worlds apart due to our language barrier, it all disseminated at the sound of the Quranic recitation. Thankfully, I found a hotel.

My Casablancan experience wouldn’t begin until two days later, after spending the entire time between the bed and the bathroom. Once I was back on my feet, I met up with a friend, Oussama, who was suggested to me by Aya, a friend I met in Spain. Oussama eagerly awaited to be a sort of Moroccan tour guide for me.

We began our journey by walking through the maze of the souks, or Moroccan bazaar, which usually signify the existence of a medina, or old city. As Moroccans proclaim, the souks are easy to get into, but very difficult to get out from due to the winding ins and outs of the paths.

I must admit, I had to put aside my American “I’m-an-independent-woman” attitude when following behind him through the souk. I also had to put it aside when I relied on Oussama to translate my bargaining skills while shopping for some Moroccan jillaba, or long dress. Somehow, the bargaining was lost in translation and I paid higher than I felt I should have.

Compared to Fez, the weather in Casablanca was very pleasant. I felt the oceanic breeze coming in from the Atlantic which was just meters away. Oussama and I ventured to the Hassan II mosque the next day. We decided to walk three kilometers from my hotel to the mosque, which allowed me to observe Moroccans. In the hour long walk it took to reach the mosque, we witnessed a car accident and dusty winds. The minaret of the mosque was visible for at least half of our walk, signifying its grandeur.

I walked around the courtyard of the mosque, imagining how it could hold 150,000 worshipers at once, since it is the third largest mosque in the world. The tile work on the walls of the mosque were intricately connected by a turquoise-green color that dominated the palette vividly. It seemed that the mosque was only one color from this view. The smell of fish from the ocean and the sound of raging waves literally embraced the perimeter of the mosque.

Outside the courtyard, I was hopping off of large stones that were placed to form a man-made beach near the mosque. I sat on one of the stones and watched as some youth in swim shorts dived from the courtyard of the mosque, now a make-shift diving board, into the Atlantic.