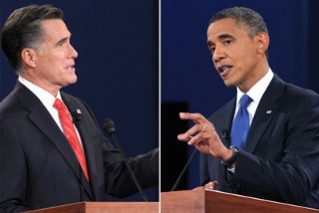 After months of campaigning, Willard Mitt Romney, Republican candidate would finally face his opponent: incumbent President of the United States and Democratic candidate, Barack Hussein Obama. At 9 PM central time, the two challengers entered the arena at the University of Denver. They shook hands before moderator Jim Lehrer explained the format and rules. The battle had begun, and the first move went to Barack Obama.

Obama started by announcing his 20th marital anniversary, and the progress he had accomplished during his term as president. He then quickly summarized Romney’s proposed economic plans, before summarizing his own plans. It would seem Obama had struck drawing first blood…

Romney countered by mocking Obama’s anniversary announcement before launching an all-out strike against the president and his points. Though Obama truck first, his challenger easily defended and struck back aggressively. Obama would surely strike back… wouldn’t he?

However to the surprise of many including his own supporters, Obama resorted to defensive tactics. Despite information about Romney’s record at Bain Capital, or the secret video regarding 47% of Americans not paying taxes,  the president failed to strike, let alone damage his opponent. Any attempt of an “attack” was only quickly rebuffed by the challenger. It didn’t help that Jim Lehrer struggled to maintain control over the debate, allowing Romney to constantly interrupt him.

However there was more to the debate than style and delivery. While Romney ousted Obama with his “zingers,” the political fact checkers went crazy as it seemed the challenger “etch-a-sketched” himself flip-flopping on major points he made during his campaign. However, the passive Obama was not free from the careful scrutinization of the fact-checkers.

Nonetheless, Romney’s aggressive attitude displayed successful results. While the initial polls showed the challenger trailing behind Obama in swing states, current polls now reveal Romney either to have caught up or even leading the President by a couple of points.

With the vice-presidential debate coming soon, two more debates remain until Election Day for either Obama to recover his losses, or for Romney to continue his momentum. Etch-a-sketcher or not, the score currently reads Romney: 1, Obama: 0. President Obama, your move.