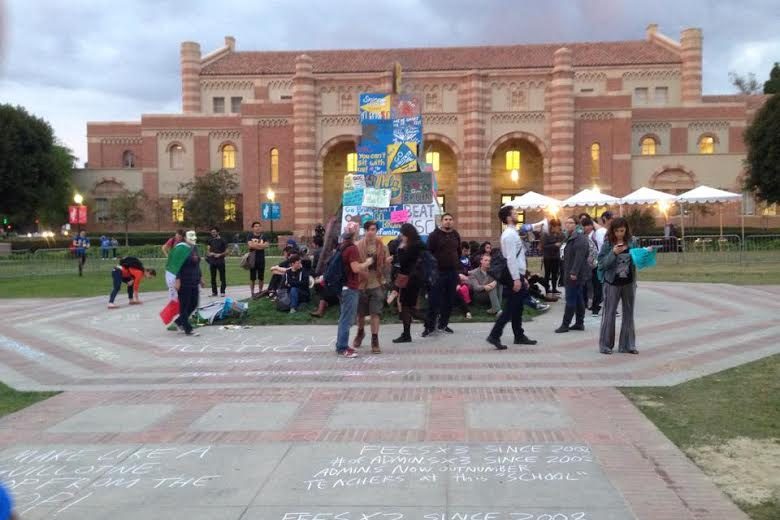 On Nov. 20, the UC Student Workers Union at UCLA organized a protest that started at 3 pm in front of Royce Hall and ended at 8 pm at the #BeatSC Bonfire, which effectively cancelled the lighting of the bonfire, a spectacle thousands of students awaited. The protest focused on various issues such as climate change, the loss of 43 Mexican students, and the UC Regents vote to increase tuition by about 5% a year for 5 years (totaling 27.7%).

Near the end of UCLA’s football season, school spirit is at a high. Thousands of students wanted to witness the lighting of the bonfire as a symbol of continuing the rivalry between UCLA and USC. These students were therefore disappointed by the denial of this traditional symbol of rivalry, replaced with a grim reminder of tuition hikes.

However, protesters are not backing down from the assertion that the cancellation of the bonfire was a necessary move, with an important message to carry.

The organizers of the protest allowed spontaneity and democracy: actions were done on the condition of the number of people protesting and their energy, and through consensus such that protesters maintain a feeling of agency. The protest began with marching, chanting, chalking, flyering, and the hanging up of signs, and ended up in front of the Student Activities Center at around 4:15 with the protesters discussing what to do.  At this point, only a couple of people introduced the idea of occupying the bonfire to the group, met with some students cheering in approval, and others pondering the explicitly stated possibility of getting arrested for such an action.

However, after a brief march over Wilson Plaza the consensus was finally held, with much more widespread approval, to break through the metal fences that protect the bonfire, and surround the pile of kindling. A few protesters led the charge, and after a few moments of realization that nobody will be arrested yet, dozens of students followed suit, taking the bonfire by 4:30.

Rally Organizers Do Not Cooperate

The decision to occupy the bonfire was further reinforced by the failure of organizers of the Rally to ensure protesters any other means of publicly demonstrating against tuition to thousands. By 5:45, the UCPD, who had been observing the protest since 3:00, and organizers of the rally approached some protesters and attempted to negotiate: if the students left the kindling, someone may be allowed to speak on stage during the Rally for 3 minutes. Although some students considered to select to speak, others murmured that the organizers may turn back on their word at any time, simply securing the bonfire without allowing anyone to speak. Many others believed firmly in the power of occupation. The concession was extended to 5 minutes of stage speaking time, and a vote was called among the body of protesters: whether to stay occupying or whether to go.

The majority voted to stay.

The protesters themselves are mainly motivated by a sense of urgency regarding tuition, and a suspicion that the Rally serves the purpose of distracting students any sense of unity between UCLA and USC students, both victims of university privatization. At one point in the evening, the chant “We don’t want no tuition fees! UCLA is USC!” was popular among protesters.

Hashim Hashimi is a 3rd year transfer student, Philosophy and Political Science major, and one of the protesters who chose to occupy the bonfire. “I felt like it was my duty. If it’s public, it should be for the mass public.” He also mentioned the long-term effects of privatization of the UC system: “What about my children? How much will it cost them?” He also holds a disillusionment with college football shared by the rest of the protesters: “I don’t think it matters who wins this game.”

Another protester, Alex Yu is a 1st year graduate student studying History, stated that the protest was organized by an “autonomous group of individuals who have…committed themselves to a life-long struggle.” His motivation for participating in the protesters’ direct action: “The Regents and state have agreed on increased state funding and a freeze on tuition hikes, and I’m pissed off because Regents have unilaterally broken this pact, because their intention is to privatize, rely on tuition rather than state funding.” Commenting on many non-protesting students, many of whom were insulting and booing the protesters, Yu said,  “I think their priorities are totally misplaced.”

Mixed Respect from Inside and Outside the Bonfire

Even among the protesters there was disagreement as to how much respect should be shown for the Rally. When various performers were sound-checking on stage, protesters gave a mixed response: On one hand, there were both loud boos from protesters in response to song lyrics urging people to buy football game tickets, and on the other hand, there were protesters attempting to calm others, asserting that it is improper to denounce the many hours of hard work students put into their performances, no matter how integrated with Orwellian USC-hate it may be.

By 6:00, hundreds of non-protesting students have gathered around the partially-open metal fence surrounding the occupiers, taking pictures and videos of the protesters, the enticing stage, and themselves. The surrounding lights and music turn on, the non-protesting students, now in the thousands, cheer, and the bonfire occupation is now officially interfering with the Rally.

As the protest continued with loud marching and chanting, the rally continued with well-choreographed dances, beautiful melodies from a capella groups, and beatboxing often at a volume entirely drowning out the chants. Understanding that the protest will not and should not prevent anyone from enjoying the artistic attractions of the Rally, many protesters danced along, and applauded performances with non-protesting students.

The respect protesters may have held for those on stage was not requited. At about 7:15, the highest-paid public servant in California, Coach Jim Mora, announced the cancellation of the bonfire to the students. He stated, “We don’t need a ****ing fire to get ****ing turned up!” and Lil’ Jon’s Turn Down for What played as members of the UCLA football team danced. A few seconds later the football coach apologized for his language.

At 7:52, the link failed. Non-protesters took control of one side of the kindling, and an elderly man standing by the wood and mesh pile, lit a lighter and held it in the air, receiving loud cheers. This put the safety of dozens at risk, as many protesters began linking again, this time directly around the pile. By 8, the police took over all sides of the pile, and the kindling is dismantled.

With this final confirmation of the success of the action, students gathered at Janss steps, and a final round of speeches were made while students mingle and exchange contact information. Some continued to react against the complacency with the environmental consequences of large bonfires (“These people don’t care about nature, don’t care about society”) and others recognize the power of a successful direct action to build momentum for the students’ movement (“This is gonna keep happening!”). A final popular vote was cast to participate in a statewide Day of Action on Nov. 24.

Refusing to Protest in a Safe Space

The reasons for justifying the occupation are consistent among all protesters as a result of a shared history of demonstrations that were witnessed and forgotten, instances of micro-aggression that did not receive a proper response, and the fruits of direct actions led by student movements all over the world.

By occupying the bonfire, the attendants and organizers of the rally were unable to ignore the protesters’ existence. Decisions made by both protesters and organizers of the rally forced everyone present to make a choice: to support the bonfire lighting, the traditional symbol of inter-student rivalry, or to support the protest. While some students did realize that the only reason behind the rivalry was to profit the multi-billion dollar sports industry and joined the protest’s calls for student unity, many non-protesters responded with hatred, and divisiveness.

Many non-protesters felt that the cancellation of the lighting, which protesters took responsibility for, “ruined the night,” their hopes to realize an activity advertized as fun dashed (while many USC students were able to successfully see wood burn that night). Many protesters, on the other hand, were able to see for themselves that the destructive effect the Bonfire had on students’ sense of unity and class consciousness (many students exclaimed “I don’t care about tuition increases!”). As a “Workers Against the University” blog post put it, “The sabotage of the bonfire was not an attack on the UCLA community, which does not exist, but an attack on the easy reproduction of the myth. The success of this sabotage forces confrontation with the true, slow, and constant violence of the university itself.”

Chakib Mouzaoui studies Mechanical Engineering at the University of California, Los Angeles at the sophomore level. A defector of the STEM supremacist project, he is also a Stephanie McMillan fan, a Richard Stallman fan, a Satoshi Kon fan, and a Prophet Muhammad (pbuh) fan.