The Implications of CVE 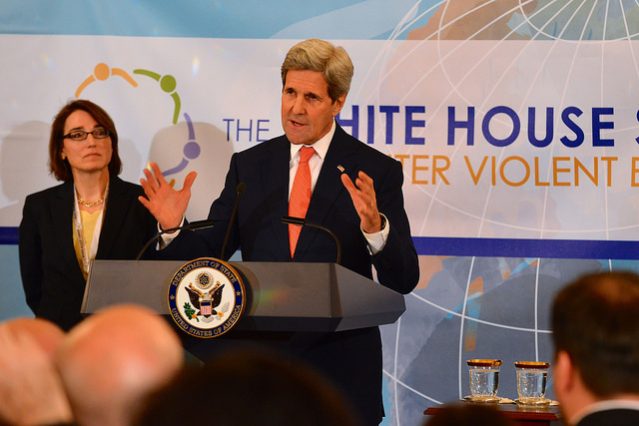 The Department of Homeland Security (DHS) has some interesting plans in store for us, and it is pressing that we understand these plans and what serious effects they have on our community. Just a few weeks ago, the White House convened a three day summit on “Countering Violent Extremism”(CVE). CVE is the creation of specific pilot programs by our federal government to counter the threat of radical and violent ideologies emerging in the U.S. Can you guess which group or community this national program focuses on? Gun-users, perhaps? Or Sexual Assaulters? Hate Criminals? Er, nope…this national program is solely and specifically targeting the Muslim American community.

CVE is being launched in three cities: Boston, Minneapolis, and right here in Los Angeles. As Muslim citizens active in MSAs, mosques, and civic organizations, the methods by which CVE aims to achieve its goals of combating extremism are extremely problematic and must be viewed critically. These methods include an exaggerated portrayal of threat by Muslims, a flawed “radicalization theory” explaining how an individual’s path down extremism can be identified by certain physical characteristics or behaviors (such as wearing traditional Islamic clothing, growing a beard, or increased involvement in religious organizations) and  a biased relationship with law enforcement. When the intent for partnership with the police is to gather intelligence information on a specific community, trust is lost.  We’ve seen this with our African American allies who’ve faced much more severe prejudice and police brutality. It is interesting to see that the percentage of Muslim Americans actually linked to terrorist acts constitutes a tiny fraction of such individuals. These points along with the growing epidemic of Islamophobia make it very difficult to see how this targeted counter-violence plan will make things any better for Muslim Americans or truly “counter extremism” within American society.  On the contrary, this fixation on the Muslim community further “other”izes us –as though we are distinct from the general public and are a group that needs to be “worked on” and further policed.

The outline for CVE is not straightforward nor consistent. According to DHS’s website, “The threat posed by violent extremism is neither constrained by international borders nor limited to any single ideology.  Groups and individuals inspired by a range of personal, religious, political, or other ideological beliefs promote and use violence.” Yet if you scroll just a tad down the website page, you’ll also find hyperlinks that scream to the reader that Islam especially and exclusively is violent, “Written testimony of Intelligence & Analysis Under Secretary on Homeland Security hearing Countering Violent Islamist Extremism” and “Written testimony of DHS Deputy Assistant Secretary on hearing titled “ISIS and the Threat from Foreign Fighters”. We acknowledge that extremism must be condemned and countered, but we question our government’s irrational approach in singling out average Muslim Americans–in singling out us.

Unfortunately, a few Muslim organizations are buying into CVE and partnering with local and federal law enforcement to implement these programs. Despite the lack of a clear and proper response as to why CVE is mainly focused on Muslim Americans and not other groups, and despite the flawed approach CVE is taking, these organizations feel the need to appease the federal government and are compromising the freedoms and rights of our community as a consequence.

As students, it is so very important for us to be critical of CVE and the stance these organizations are taking in supporting it. We must be unapologetic and firm in our demand for equality and freedom to practice our faith without being forced to feel like criminals. Our community is sick and tired of being stigmatized and suspiciously treated. Recently, MSA West along with MSAs across the west coast united and took a stance in denouncing CVE. The statement can be read here.

I admit that I personally had no knowledge of CVE prior to MSA West’s mobilization on the issue. It cannot be stressed enough how important it is that we students become aware of such issues and make it clear that we will not tolerate this CVE model nor apologize for people or actions we do not identify with.

“Oh you who believe! Stand out firmly for justice, as witnesses to Allah, even as against yourselves, or your parents, or your kin, and whether it be (against) rich or poor: for Allah can best protect both.” (4:135)

**Read up more on the context and the negative impacts of CVE in this very thorough statement co-signed by various Los Angeles based community organizations that strive to defend the rights and liberties of all Americans, namely the Council on American-Islamic Relations, the Asian Americans Advancing Justice, the American Civil Liberties Union of Southern California, the Sikh American Legal Defense and Education Fund, and the Islamic Shura Council of Southern California.