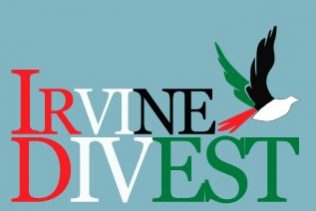 (IRVINE, CALIF., 11/13/2012) – In an historic move that could initiate a domino effect across America’s campuses, the Associated Students of UC Irvine voted unanimously to divest from companies that profit from Israel’s occupation of Palestine, including from companies that contribute to illegal settlement construction in the occupied Palestinian territories.

With 16 votes in favor, 0 abstentions, and 0 opposed, the elected undergraduate student representatives of the University of California Irvine unanimously passed a resolution urging the University to withdraw its investment funds from Caterpillar, General Electric Company, Hewlett Packard, Raytheon, and other companies profiting from human rights violations in the occupied territories. The students also pledged to further examine UC assets for investments in companies that profit from human rights abuses anywhere in the world.

The resolution was drafted in response to the 2005 Palestinian civil society call for boycott, divestment and sanctions against Israel as a means to force it to comply with international law and end its occupation of the West Bank and Gaza; allow Palestinian refugees their internationally guaranteed right to return to their homes and villages; and grant equal rights to Palestinian citizens of Israel. Other divestment successes have occurred at Hampshire College and Evergreen State College, as well as the WeDivest campaign which focuses on pension fund giant TIAA CREF and has resulted in, among other things, the removal of Caterpillar from its Social Choice Funds.

Sabreen Shalabi, the student representative on the legislative council for the school of social science and co-author of the legislation said, “I am very proud of my fellow council members and of the students at our University. Our work today stands tall in the noble tradition of students advocating for justice, joining the ranks of those brave and visionary students who demanded that our Universities divest from the terrible crimes of South African apartheid.”

Traci Ishigo, President of the Associated Student of UCI and a member of the UC Irvine Foundation, said “The decision made by ASUCI’s legislative Council tonight clearly shows the strength and integrity of students utilizing their collective power to protect human rights on a global scale and I stand firmly by the students who believe it is their responsibility to have a voice on matters that urge the UC to be an institution that treasures human dignity.”

For more information, or to read the resolution, click here.