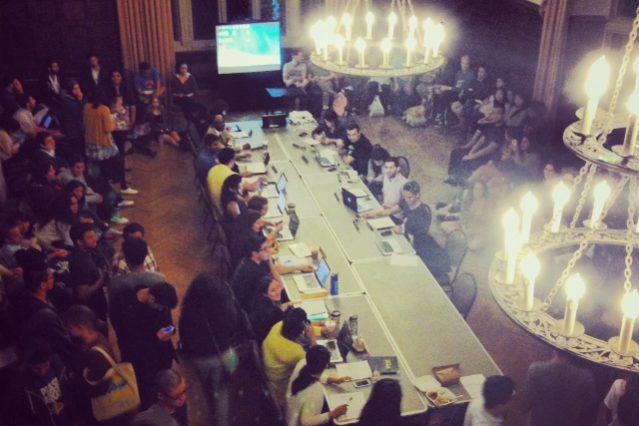 [dropcap]A[/dropcap]t 2:59 AM on Oct. 23, USAC voted 5-7-0 against “A Resolution In Support of Positive Steps Towards an Israeli-Palestinian Peace,” authored by USAC’s Internal Vice President Avi Oved. The other sponsors to the resolution were General Representative Sunny Singh and Academic Affairs Commissioner Darren Ramalho. The resolution was put on the table only two weeks prior to one of Students for Justice in Palestine’s (SJP) most important events of the year– Palestine Awareness Week. Also, the SJP National Conference is this weekend.

A two minute limit was emphasized for each public comment. This part of the council meeting was heated and full of passion as the comments were going around the room.

The first commentator introduced himself as a former president of the Armenian Student Association and stated that the resolution was “one-sided,” claiming it favored pro-Israelis. This began the two-and-a-half hour long public forum during which various UCLA communities articulated their concerns about the intentions and ramifications of the resolution.

Over 40 voices were heard during the public comments. Participants claimed membership from student organizations such as SJP, MSA, Afrikan Student Union, MECHA, Queer-Alliance, Hillel, Alpha Epsilon Pi and Bruins for Israel among others.

Rasha Howlader, a board member of SJP, asked the big question of the evening, “Why weren’t actual Palestinians accounted for when forming this resolution?”

She also stated: “Consider that when you vote tonight—consider that while through this resolution, we may increase our investments, we will continue to consciously be invested in companies that have very real effects on the Palestinian men, women, and children whom this resolution pertains to.”

Another SJP board member, Omar Zahzah, claimed Singh had a conflict of interest regarding the resolution. Singh traveled to Israel paid by the Anti-Defamation League (ADL) which is vehemently anti-divestment, as was the original language of the bill. Despite this last point, the council decided there was no conflict of interest. During the meeting Ramalho, another sponsor of the resolution, disclosed he also traveled to Israel paid by the ADL.

In an op-ed by Rahim Kurwa and Omar Zahzah, the two explain why they think Avi Oved did not consult Palestinian or pro-Palestinian students during the drafting of this resolution: “We believe the reason for our exclusion is that if we had been included in writing such a bill, it would be dramatically different in content. It would call for the basic preconditions that must exist before any investment program can be successful – namely a lifting of the conditions of military control and unequal laws that deny Palestinians autonomy and equality.”

Council members were concerned that Avi Oved didn’t approach student groups when writing this bill. He responded saying that he did not mean to speak on behalf of Palestinians and rather did not approach any group. A council member pointed out that although he might not have obtained formal sponsorship of the bill from the groups, his membership in Bruins for Israel and Hillel should not go unmentioned. This resolution, as his initial intention, was to facilitate discussion, which it did, but after the resolution was written.

The president of Bruins for Israel, Miriam Eshaghian, reiterated that this bill is a means to facilitate dialogue and peaceful conversation amongst both sides.

A similar sentiment was expressed in an op-ed by Singh: “The resolution acknowledges the numerous perspectives and narratives that surround the conflict. It also recognizes the hardships that different communities face because of the conflict.”

A Palestinian student whose family is from Gaza, felt offended by the whole situation occurring on his campus, “If I knew that even one cent from UCLA was invested into the missile that hit my home, I would not come to UCLA.”

Another commentator who introduced himself as the former chair of Queer-Alliance and member of ASU, highlighted that he can relate to those being criminalized, for he has felt discrimination in America and mentioned the criminalization of African immigrants in Israel: “I would like to talk about the sterilization of African women in Israel… Don’t draft a resolution and take away people’s power!”

A student who identified himself as Jewish Israeli commented against the resolution and in support of Palestinians. One member of the audience said “shame” as the student left the meeting and another called him a “traitor.”

External Vice President Maryssa Hall fought against passing this resolution due to the lack of student involvement and claimed that if a new resolution was brought to the table after real talks were made amongst the students, then it could be considered. To propose a bill that had no input from the student body, especially with such a controversial issue, has no substance.

Although during the discussion it appeared the council members would allow the revised resolution to pass, the entire resolution failed 5-7-0 at 2:59 AM. 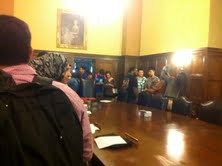 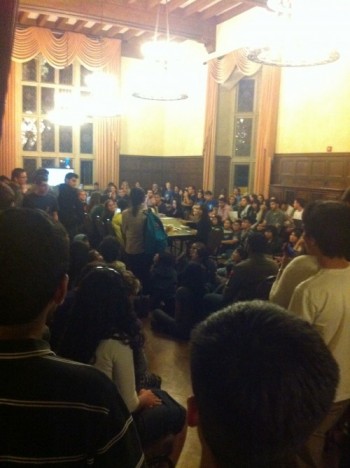 Timeline of the evening

(6:52 PM) An announcement was made that the meeting venue, Kerckhoff 417, had surpassed maximum capacity as more students continued to make their way in.

(7:16) Location moved to Kerckhoff Grand Salon to accommodate all students.

(7:26) Meeting convened. Soon after, public comment was motioned to begin.

(9:55) End of public comments. Less than half the room remained to watch the council proceedings.

(11:50) After Oved reads the resolution out loud, council members ask why Palestinian students were not consulted about it. Oved states, “This is not a pro-Israel resolution or pro-Palestine, it is a resolution trying to find an approach to this solution.”

(2:50 AM) Resolution is called into question.

@buberzionist Pro-Israel solidarity tonight has been beautiful. 2:43 and @BruinsForIsrael & Hillel and more are still out there #SJPatUCLA #solidarity

@PalestineToday The anti divestment parts of the bill have failed but they can’t figure out what to do next. #SJPatUCLA

@SJPatUCLA Gen Rep Sam: I can’t ignore those voices that were alienated by this resolution. Need more communication & dialogue with them #SJPatUCLA

@SJPatUCLA CEC Jessica: I don’t feel comfortable with this resolution. Neither side was consulted. #SJPatUCLA