A New Blueprint on Education Reform 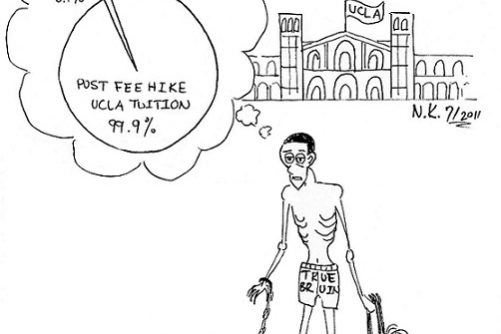 Exhausted after a long day of classes and work, third year English major, Victoria Beyrooty takes a bus back to her apartment, passing restaurants and movie theaters that she can no longer afford.

Due to the tuition increase over the last few years, students like Victoria Beyrooty are forced to take on extra jobs and cut personal expenses in order to pay for school. In accordance to the tuition increases, middle class students receive less aid. “The stress continues to increase,” she says “as I have to take out more in loans and receive less work study hours.” If President Obama’s blueprint on federal aid to education is implemented though, some of the anxiety of paying for school may be alleviated.

President Obama announced his blueprint for keeping college affordable in his State of the Union address on January 24, 2012. In his blueprint, the president called for reform in federal aid by awarding schools that keep tuition affordable and giving federal support to tackle the cost of college.

To provide more information to college students, Vice President Biden held a conference call on February 2, 2012 regarding the new plan. On the conference call, the vice president went into detail on the mechanics of the president’s blueprint. If the plan goes becomes a reality, schools that show innovative ways to keep tuition down will receive more federal aid. For example, if a school works with community colleges to transfer units so that students do not have to pay again to repeat the same course, the federal government will provide more money due to the school’s effort.

The vice president mentioned keeping interest rates low so that students will have to pay less back after graduation. The current interest rate on federal student loans is 3.4% but is set to double to 6.8% over the summer. The blueprint proposes to keep the interest stable for a year at its current rate. Vice President Biden also discussed doubling the number of work study jobs to assist more students in paying for school while also gaining work experience.

Due to the tuition hikes by the UC Regents, UCLA may be ineligible to receive extra aid that the federal government will designate towards schools that lower tuition. Joelle Gamble, External Vice President of UCLA’s Undergraduate Students Association Council, discussed the potential outcome of the blueprint on UCLA students and how it may not concern them at all.

“A plan like this has never been seen. This can potentially happen or just something to discuss in the state of the union address,” Gamble says. “Even if it does go into effect, The UC’s are more affected by state aid than federal aid.”

If that is the case, students may have to continue dealing with paying more for college regardless of the blueprint going into effect or not. Students like Victoria Beyrooty might just have to continue to cut personal expenses just to make ends meet.