Op-Ed: Affirmative Action Is Not Reverse Racism: Check Your Privilege 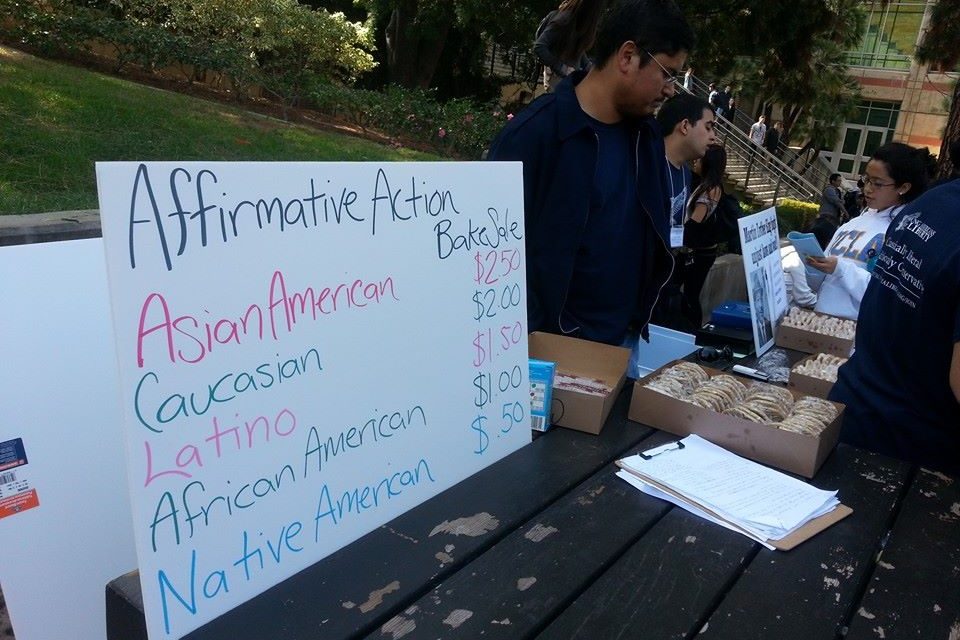 The problem with the event, simply put, was that it was a) a gross misrepresentation of the system of affirmative action and who it benefits and b) it completely ignores the historical/systematic barriers that communities of color have experienced when coming into contact with institutions and the inherent benefits that those from the dominant class have inherited (whether they acknowledge it or not).

Affirmative Action is NOT a get-into-college instant pass

First, to equate the benefit of affirmative action to a sliding scale of access to college, with communities of color reaping enormous and completely unfair advantages is, frankly, absurd on a number of levels. First, it makes the assumption that simply by identifying as Black, Latino, or American Indian/Alaska Native, you gain an almost-instant acceptance into universities, even if you wouldn’t qualify otherwise. This is simply not the case and an extreme exaggeration of affirmative action. Affirmative action in admissions is not a quota system; in many systems that have previously used or currently include race within holistic admissions processes, race equates to one point in a typically 12-point system. One point. That’s hardly an advantage or a free-entrance pass to college.

This sliding scale utilized by the Young Americans for Liberty group also ignores the intersectionality of race, class, gender, sexuality, and life experience that UCLA includes in it’s current admissions process. It places Asian Americans at the top of this scale, homogenizing the experiences of Asians and helping to perpetuate the model minority myth; it does not take into account the struggles of many Southeast Asian and Pacific Islander groups, who often experience many of the same institutional discriminations that Blacks, Latinos, and American Indians/Native Alaskans have experienced here in the US. There’s no mention of how LGBTQ communities of color experience the admissions process, nor a mention of how rural whites from extremely poor communities interact with colleges either. This flaw that some say is just a technical detail and takes away from overall argument against affirmative action, is a critical one. It points to complexities in the admission process in helping to not only admit students who are “qualified” to this campus, but also to help create a truly diverse campus climate, particularly for underrepresented groups.

Secondly, affirmative action was created to attempt to remedy a systematic exclusion of communities of color from academia. It was not, and is not, a final remedy and only solution to repairing this critical issue. The path to college for communities of color is one littered with countless institutional barriers such as the lack of intergenerational wealth and cultural capital, the educational systems in communities of color that push students out of school instead of towards higher education, the school-to-prison pipeline that locks up Black and Latino students at alarmingly high rates, and the current economic system that further perpetuates a severe gap between the wealthy and the poor, among others.

Be aware of your privilege

Lately, whether at the USAC hearing for the flawed, biased, and recently defeated Israeli-Palestinian resolution, or in the social media fallout from the USAC meeting and the affirmative action bake sale, there is a large contingent of voices denying that white privilege exists, calling it reverse racism, and calling on communities of color to have a more peaceful dialogue, one that doesn’t marginalize anyone or accuse anyone of being an oppressor.

If someone calls you out on your white privilege, they are not marginalizing you. Plain and simple. They are asking (or telling) you to be aware that you were not born in a vacuum and that your skin color and ancestry have a very specific meaning in this country, a meaning that affords you and your ancestors certain advantages, perks, or benefits that a large portion of this country do not experience and are prevented from accessing, simply because of their skin color, nationality, ethnic and/or cultural practices, sexuality, and so on. You can deny it all you want, but that doesn’t mean the system will cease to exist with your denial. Your denial means that you are individually choosing to continue to support a system that has, I’d argue, the most far-reaching and damaging effects on communities of color in this country. Your denial of white privilege doesn’t mean that less Blacks and Latinos will be incarcerated in their lifetime; it doesn’t mean that Black, Latino, and American Indian women will no longer be making the lowest income among all groups in this country; it also doesn’t mean that queer youth of color will suddenly no longer experience disturbing rates of homelessness in Los Angeles County. Your denial of your privilege perpetuates inequality and is offensive to us folks of color who have to fight uphill against a system that devalues (and sometimes exploits) our cultural practices, our languages, our countries, our his/herstories, and our unique experiences and struggles in this country. When you attack affirmative action, you send a very clear message to those of us who, despite the odds against us, have made it to UCLA. You’re saying we don’t belong here, that we’re not qualified to be here, and that a campus that is inclusive and supportive of everyone is not important to you. It is dehumanizing and it needs to stop.

Affirmative actions is one tool, not the tool

Affirmative action on this campus, whether it is in admissions, or faculty or staff hiring (which has an even greater racial disparity than admissions), is an integral and necessary part of the healing process for communities of color. With non-white babies outnumbering whites for the second time in this country’s history (let’s not forget that whites weren’t always the majority) it is imperative that the country responds to changing demographics. This change, however, cannot support the current status quo and must integrate a critical stance on whiteness and the economic systems that exploit our communities and prevent us from making significant changes to our current situation. Affirmative action remains one of the best options for making changes within the current system until a new system of rule and economy can be implemented in this country.