Inside Look at Syria’s military establishment 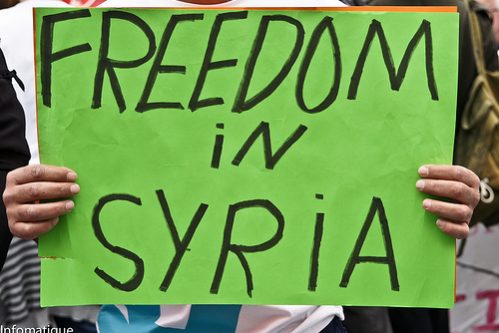 By Ahmed (name has been changed for security reasons)

Last summer, I visited my relatives in Syria during the month of Ramadan. What I didn’t expect was to find myself in the middle of the Syrian military establishment.

One of my reasons for going back was to fill out paper work for the government proving that I am an only child. In Syria, all males over the age of 18 that have a brother are required to do two years of mandatory military service. I luckily escaped that being an only child, but unfortunately the process of proving you’re an only child is a struggle in itself.

Going into government buildings one by one, my family was required to bribe every employee to get them to do any work. Not one government employee was willing to process my paperwork without a bribe. And when they found out that I was an American, the bribes they demanded became more and more expensive.

The bureaucracy there was incredible. I had only two weeks to finish the paper work, a process that normally takes several months of navigating through government buildings.

Yet we hit a problem.

They would not process my paperwork because I was required to be present to sign it. My parents however, didn’t dare bring me to the police establishment because I was a year late in doing this paperwork.

Having been a student here at UCLA I couldn’t go back to Syria last year and was therefore wanted by the police. In Syria, you are guilty until proven innocent, and I could have faced immediate imprisonment.

And so I did what any other Syrian does to try and get things done. I used connections. One of my family members had been a close friend of a government official, so we contacted him and he sent an aide to get our work done. After that, we rushed through the process, having had an “authority figure” give us the clearance.

Through the hot summer streets we would quickly dart back and forth between various buildings, including the police establishment.

So I proceed to enter a military barrack with soldiers guarding every door with an AK-47 on their shoulders. I could feel the intimidation and fear by my peers who were also in line for the same thing I was.

The soldiers were smoking in our faces, almost purposefully trying to humiliate us. One kid about my age didn’t hear the soldier call his name and so the soldier proceeded to give him a beating.

I was terrified, what in the world am I doing here?

And then they called my name. I walk past the lines of soldiers unsure of what was to happen next. They ask me to go into a large room with a bunch of other kids and strip; I was to be examined shortly. And then I see the doctor–an ordinary soldier. He asks us to turn around, do two jumping jacks, and squat. The so called “physical exam” was over.

I was then to get my paper work signed and approved, proving I did the physical. And yet, when I bring my Military journal to one of the soldiers, he gives me a stare that made me question what I had gotten myself into.

He asks me in Arabic, “How did you get in here? It says you are wanted by the military for evading paperwork for a year.” I respond, my voice trembling, “I don’t know, the guy said I can come in here and it’d be fine.”

He quickly understood–I had a connection. He looks at me and asks me where I’m from,America I said.Almost immediately, the guy tells me to go upstairs and get the paperwork stamped by other higher-ranking soldiers.  I was horrified of what I thought I would face next.

Upstairs I found some higher ups reclining, smoking, and drinking tea.  In every office was a mammoth sized picture of President Bashar Al-Assad, and some with pictures of his father, former President Hafiz Al-Assad.

Each one of them stamped my paperwork without questioning me, and they didn’t even look at what it was they stamped. I didn’t even know what I was doing, just walking from office to office to get these useless stamps.

When I was finally able to step out of that building, I felt a sense of freedom.Not the freedom we enjoy here in the United States, but a freedom that I was out of the grips of the military. No doubt, I was still in a country ruled by a military dictatorship, but being inside the military barracks is a lot more frightening then being on the streets.

As the protests in Syria grow larger and larger, the government has been scrambling to prevent a scenario that has now played out in Tunisia, Egypt, and Libya. Their primary weapon is fear, and since the people have lost that fear they have turned to violence.

Everyone has been affected by this violent suppression in some way, whether it’s the loss of a family member or their imprisonment in an undisclosed location. But the people do not care to stay quiet anymore, even if it means their own government will murder them.