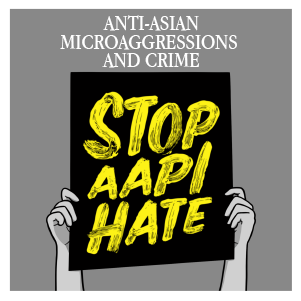 Amid the turbulence of the past year, despite an overall decline in the number of hate crimes in the U.S, hate crimes against Asian Americans rose by almost 150 percent. On multiple separate occasions, elderly Asian American people were attacked on the street, including one brutal incident in New York where bystanders stood by and did little to help the victim. Another was assaulted in San Francisco but successfully fought off her attacker. And heartbreakingly, in Atlanta on March 16, eight people were killed by a white gunman on a targeted shooting spree; six of those killed were Asian.

These acts of violence have scarred communities across America. In total, around 4,000 incidents were reported in 2020 nationwide. To this day, racism against Asians is often stripped of its context: a history of orientalist mistrust and dehumanization of Asian individuals. Violence against Asians skyrocketed during the COVID-19 pandemic and can be traced directly to the othering rhetoric of the “China virus” pushed largely by conservative outlets, among other racialized epithets.

Microaggressions against Asian people are frequently treated as little more than a joke. For example: a German radio host of the Bayern3 station made several comments about the Korean music group BTS that compared the members to COVID-19. In a statement, the station doubled down on their racism, only apologizing for any perceived slight towards the fans rather than apologizing to the group directly. More recently, BTS has spoken out in solidarity against the recent violent acts against Asians, offering their own experiences with racism abroad. Singer Eric Nam also spoke about the Atlanta shootings in conjunction with his experience growing up in America, being called racial slurs alongside feeling compelled to laugh along with the people disparaging his heritage.

Jokes about Asians should not just be brushed off as dark humor. These jokes perpetuate the narratives that have troubled Asian Americans for centuries, whether it be the idea of the model minority, or the interchangeable, robotic worker, or the “submissive” Asian woman (a stereotype also steeped in misogyny). Particularly with respect to COVID-19, it is unconscionable not to denounce the generalization of Asians as disease ridden. As hurtful as these stereotypes are by themselves, they become sinister, alarming preludes to violence.

Steps are being taken to aid the Asian American community at various levels. The Senate passed a bill on Wednesday bolstering federal efforts to counter anti-Asian hate crime, and President Biden has named Erika L. Moritsugu to the newly created position of liaison to the Asian American and Pacific Islander (A.A.P.I.) community. Multiple states have introduced legislation over the past year that would strengthen protections for minorities across the board, while in California an assemblyman introduced legislation in January intended to create a permanent State of Hate Commission.

Within UCLA, students who have experienced an incident of discrimination may report to the Office of Diversity and Inclusion. The Asian American Studies Center and the UCLA Fielding School of Public Health have also developed the stopaapihate.org site, where additional resources may be found.