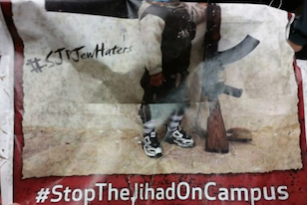 By: Cindy Toledo and Ayman Ahmed

On Thursday, November 12th, as UCLA students stood in solidarity with the Afrikan students of The University of Missouri, UCLA students themselves were faced with discriminatory posters and images aimed at Muslim students and student groups on campus. These signs specifically targeted Students for Justice for Palestine (SJP) and the Muslim Student Association (MSA). These posters were posted all over multiple campuses, including UCLA, UCSD and American University, where an immense number of students could clearly see them. Every aspect of this poster promoted hostility; including the disrespectful hashtag “#stopthejihadoncampus.” This act disrupted the compassion and unity that UCLA students were feeling amidst the climate of support that was being directed to the students of Missouri. 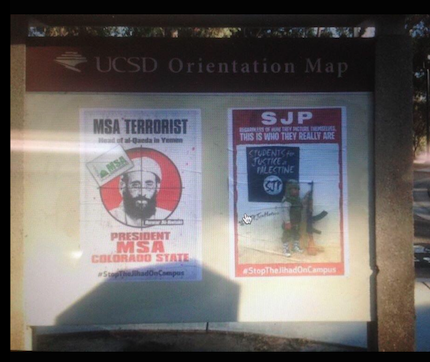 As expected, students on campus were upset by the hate that these posters intended to spread. Students felt that these signs were intended to smear the image of the Muslim community and affiliated individuals. Wali Kamal, MSA member, expressed how campaigns, such as this one, are “meant to get all students (not just Muslims) to think twice when supporting Palestinians’ rights, because you will be labeled ISIS. I really would rather not this have happened.” Students were also surprised that two distinctly different groups were targets of these posters. Yacoub Kureh, SJP board member, explained his surprise to the posters: “the recent posters attacking not only Students for Justice in Palestine, a secular activism group, but also the Muslim Student Association, a religious group, came initially as a surprise to me given that these are different organizations with distinct missions. In the past, SJP was the sole target of similar hateful posters put up on campuses across the country and our organization unequivocally condemns this week’s posters as we did all of those.” Additionally, students were expecting an open letter from the Chancellor of UCLA Gene Block clearly condemning these posters and act of hatred. However, in response to this menacing act, Chancellor Block only mentioned, “Islamophobic posters appeared on campus, in complete disregard of our Principles of Community and the dignity of our Muslim students.” Chancellor Block did not address how the posters directly targeted students who stand for Palestine and Justice in Palestine. 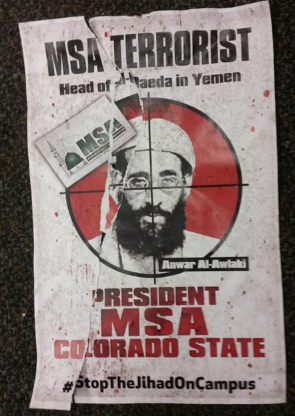 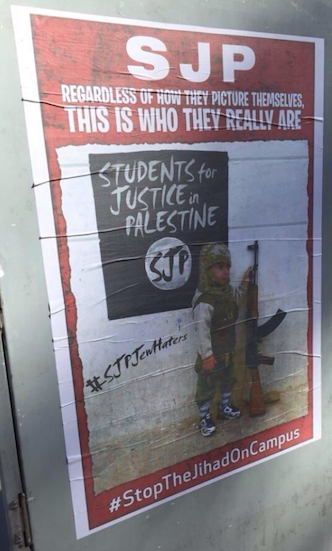 SJP and MSA, however, are working to address these posters through various programs and events. Yacoub Kureh further expressed, “we [SJP] continue to encourage students to attend our events or to talk to our members as we believe this to be an effective way to dispel any untrue preconceived notions or misconceptions people may have about SJP. We are also attempting to work with the University to better understand what tools and options we have for moving forward–especially to help students who feel unsafe or threatened for their political views or identity.” Both SJP and MSA are attempting to work with the University to counter this hatred and move towards a safer environment. Tahira Kazmi, MSA board member, explained that MSA hosted a Da’wah (invitation) table on Bruin Walk during the week of November 16th, in order to provide bruins with a platform to ask questions about Islam and/or Muslims.

Even though reactions varied among individuals and organizations, it is important to note that the UCLA community should not tolerate hate directed towards any individual or groups of people. Individuals must not internalize the ideas and fear spread by these posters, and instead we must stand together and condemn such acts of hatred. #stopthehateoncampus #stopthediscrimination