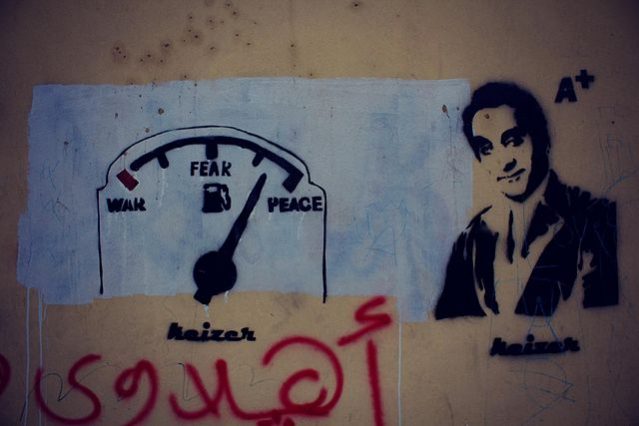 [dropcap]I[/dropcap]n a comment left on AhramOnline, a Bassem Youssef fan writes “Bassem is the strongest revolutionary we’ve seen in a while!” This attitude is shared by many throughout the Middle East who respect Youssef for fighting for freedom of expression post-revolution.

Outraged by the fear mongering tactics of local news stations aimed at suppressing the demonstrations in Tahrir Square in January 2011, Bassem Youssef created a parody webseries on YouTube called “The B+ Show.” The immediate popularity of the series led it to become the first program in the Middle East to switch to television from the web. The satirical news, newly named Al-Bernameg (The Program), has had groundbreaking success since its debut in September 2012.

Al-Bernameg is one of a small number of television programs in Egypt which host a live studio audience. Youssef, a heart surgeon turned comedian/television host shares great admiration for comedian/media critic/television host, Jon Stewart, and has stated that Al-Bernameg is modeled after The Daily Show. Youssef also employs many of the techniques utilized by Stephen Colbert in The Colbert Report, using a variety of props, graphics and montages to hold Egypt’s leaders accountable for their actions and exposing the “deceit and hypocrisy” that Youssef says is so common in Egyptian television news reporting. The show gets more than 30 million viewers across the Middle East who yearn for a fresh perspective from media figures.

While the show’s lampooning of the government, media and religious figures has gained it international popularity, it has also earned it a hostile following. Youssef has been subject to several lawsuits, many from Islamist lawyers, calling for the suspension of the show for inappropriate content.

In March 2013 a warrant was issued for his arrest for allegedly insulting Islam and diminishing the stature of President Morsi, a former member of Egypt’s Muslim Brotherhood. His arrest is said to be part of an increase in legal action against activists, protesters and critics, as the government crackdowns against dissent.

In an interview with the Huffington Post, Youssef explained that he is not critical of Islam itself, but individuals who have hijacked Islam for their own agenda. “I’m a proud, practicing Muslim,” he said. “I break down holy taboos that should not be holy and should not be taboos because…I’m someone who believes that religion should be used as spiritual guidance, not a source of or a tool of tyranny. Once you start using religion to control peoples lives through politics, now you have missed the point.”

Despite arrest, lawsuits and political pressure, Youssef’s satirical sketches continue to confront the Egyptian government. In an episode aired in April, Youssef targeted Qatar, a known financial-supporter of the Muslim Brotherhood. He criticized what Al Monitor stated can be seen as “Qatar’s aggressive political ambitions” in Egypt. Youssef orchestrated a parody of the popular Nasser-era Pan-Arab song, “My Beloved Homeland,” changing the title to “My Beloved Qatar.”

The lyrics included: “Qatari my darling little brother, day after day your money grows… your finances are full in my country… The Suez Canal is yours. Sell to Qatar and reap the benefits. Sell the Egyptian pyramids and build two more… All the Egyptian people thank you.”

Al Monitor explains that some attribute Qatar’s eagerness to provide financial aide to Egypt as a means to gain influence over the state. Others believe it is to help keep the Muslim Brotherhood and Islamists in power.

When the sketch ended, Youssef clarified that he had nothing against the Qatari people, explaining that what he was being critical of was how the Egyptian government was encouraging foreign investors to sell or rent crucial sites.

Al-Bernameg is said to be the most popular television show in the Arab world and is quickly gaining recognition from international audiences. Youssef appeared on The Daily Show for the second time on April 24, 2013 after appearing on the Time 100 list of the world’s most influential people.

At the height of his popularity, Youssef continues to push the boundaries of freedom of expression in Egypt. Humor has provided comedians like Youssef an alternative sphere of engagement that allows them to voice frustrations with Egyptian authority figures and institutions. This new generation of post-revolution comedians is creating a space for meaningful discourse that provokes reflection and action through the use of comedy.