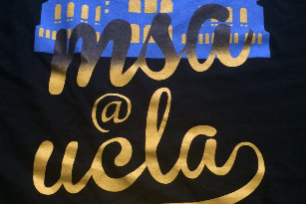 On April 12, MSA at UCLA hosted its biggest event of the year: College Day. Every year, hundreds of middle school, high school, and community college students come from all around California to this day-long event, where they learn about college life, the college application process and other, general matters relevant to Muslim youth in America. The College Day Committee puts in tireless work for four to five months, to ensure that the event goes smoothly, every aspect is taken care of and all attendees leave with meaningful lessons. This year, too, hundreds of students from as far as San Diego came out to this meticulously planned event.

College Day usually cumulates in its entertainment night during which there are performances, skits, videos and, occasionally, comedy.

This year, the comedian scheduled to perform was Ahmed Ahmed. As many of his colleagues, he started his performance off with racializing his audience and making Islamophobic jokes.

He asked who in the audience is Arab, and when a significant amount of the about 200 students in the auditorium cheered, he said that that was a “sleeper cell’s dream.”

After a long and painfully uncomedic “role call” of various national backgrounds and obscurely personal questions asked of audience members (“What is your full name? Are both of your parents Muslim?”), he prompted the audience to ask him questions. When an audience member asked, “Are all of your jokes based on ethnicity? Because that’s not funny,” he got visibly irritated and questioned the questioner’s knowledge of comedy.

“Is this the first time you’ve been to a comedy show?”, he asked the audience member who donned the Hijab, followed by, “Maybe you should come up here and tell a joke if you don’t think this is comedy.” Visibly aggravated that his offensive jokes were not well-received, he made a scene and concluded by telling the audience, which largely consisted of underage, Muslim middle school and high school students, “Y’all need to get laid.”

At this point, the MCs stepped in to stop him. Still somehow determined to make his “comedy” heard by an audience that was visibly unamused and appalled, he insisted to keep talking at the audience long after his mic was shut off.

When organizers and leadership took him to the side to talk to him, he continued to feel entitled to finish his performance, shouting at the audience, “This is why Americans have problems with Muslims.”

Clearly, Ahmed not being given the opportunity to tell kids to get laid is not the reason why Americans have problems with Muslims (if we even accept that dichotomy to be real). Islamophobia has deeper roots but perhaps realities of imperialism, racism, proxy wars, racialized Other-ing, blatant Islamophobia, and military occupations have escaped a man who has elsewhere joked about how “all Muslims do is blow shit up,” and other thinly veiled racist and Islamophobic tropes that were passed under the guise of the second-rate attempt at comedy we saw that evening.

Ahmed’s brand of “humor” is part of a long line of subpar comedy that only gets exposure because it makes non-Muslims feel comfortable and cozy when they laugh at Islamophobic jokes like, “all Muslims do is blow shit up”. Beyond jokes that make tropes out of identities, this line of comedy has little going for itself.

I am confident that I was not the only person who simply wanted to walk out of the auditorium in which Ahmed’s aggressive, irritated, and offensive presence created a very uncomfortable environment. What was most upsetting about Ahmed’s presence and remarks was perhaps not the offensive content itself but the ways in which that can be twisted to reflect negatively on the organizers and leadership of the event which are, by far, among the most hard-working and dedicated people I know. What that man said in no way represents what the MSA, the organizers of College Day or the Muslim community on this campus stand for. The fact that I have to even make this distinction stems from the reality that we live in an environment – to which Ahmed actively contributes with his bigoted Islamophobic remarks – in which all Muslims are seen as a monolith and asked to distance themselves from the “bad ones” in order to be deemed worthy of respect.

Regardless, I take pride in the way the MCs and MSA leadership handled the situation with decorum, grace, and dignity, all while asserting themselves firmly and standing their ground. Looking back, this was perhaps the most important lesson the attendees of College Day have left with: How to handle hostile, aggressive negativity in a commendable way. It was ironic that at the end of a day during which so much of the efforts focused on teaching attendees about racism, classism, Islamophobia, and other matters of social justice, this performance epitomized so much of what is wrong in society. However, no workshop, no video, and no pep talk could have taught the lesson of how to face blatant Islamophobia and bigotry with such dignified power the way the organizers’ handling of that situation taught it.

We do not live in a post-racial, post-Islamophobic society and racist, Islamophobic jokes are not “okay because they are jokes”, “okay because it’s a Muslim who makes them” or “okay because a black guy laughed” (as Ahmed claimed in his short-lived presence on the stage). It is real, harmful, and devastating and speaking up against it doesn’t mean that we “can’t take a joke” but that we know better than allowing ourselves to be walked all over with insensitive and offensive remarks just to prove to Ahmed and his likes that we deserve being accepted in America.