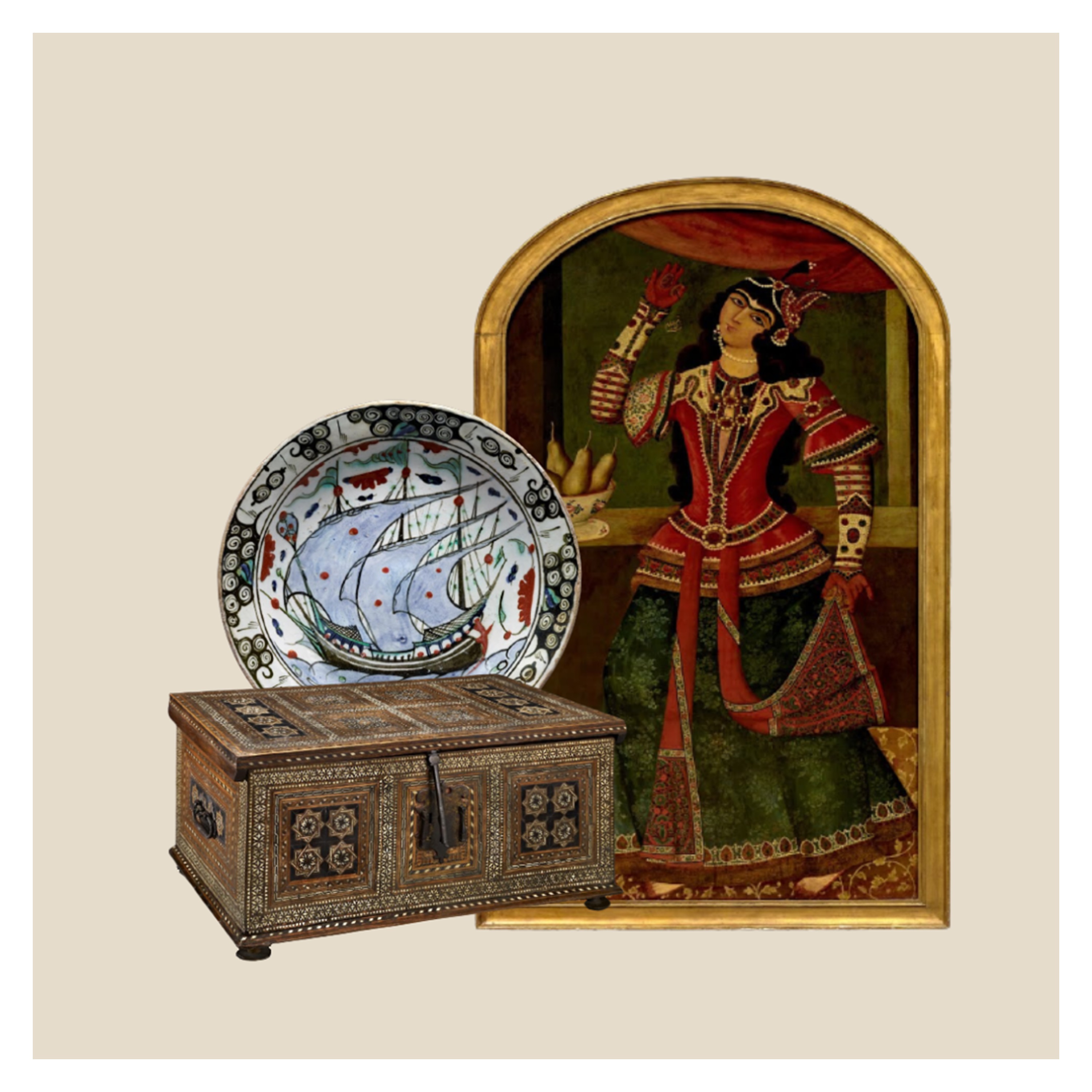 In Islamic culture, mosques, mosaics, and folios have served as quintessential exhibitions of artistic expression throughout the Dar-al-Islam. In recent years, however, art historians have uncovered unorthodox artworks that not only transcend traditional archetypes but also shed light on Islamic society from previous centuries.

In 2007, the Museum of Fine Arts, Houston unveiled a historic exhibit, titled “Art of the Islamic Worlds,” that has showcased dazzling displays of Islamic artworks with unique mediums and subjects. Particularly, this article will analyze three extraordinary pieces from the museum’s gallery to explore uncommon frontiers in Islamic art and its diversity.

Crafted during the 17th century, A Galleon at Sea is a dish developed in Iznik, the heartland of ceramic production of the mighty Ottoman Empire. Not only is A Galleon at Sea comprised of porcelain, but it also features scrolling wave patterns that are reminiscent of Chinese artworks during the Ming Dynasty. Particularly, the use of porcelain in and of itself distinguishes this piece, as Islamic art was typically created in architecture and mosaics with stone, marble, tesserae, and semiprecious stones. Unlike other Islamic pieces, which feature calligraphy or geometrical patterns, A Galleon at Sea displays a physical subject matter — a large, three-masted ship traversing gusty winds and stormy waters for distant trade ports. By visualizing the maritime experiences of Muslim merchants, A Galleon at Sea attests to the widespread commercial successes that have characterized the Ottoman Empire. In particular, as Islamic empires expanded throughout modern Southwest Asia, trade networks formed throughout the Indian Ocean Basin and Mediterranean Sea, enabling the exchange of commodities and cultures. This overarching commercial trend manifests itself in A Galleon at Sea as well, given that its porcelain techniques derive from Chinese predecessors — a testament to the long-distance networks formed during Ottoman prosperity.

While calligraphy has taken center stage in Islamic art, the Scribe’s Box demonstrates a host of innovations. Developed in the 15th century in modern-day Spain, the Scribe’s Box is a woodwork production formed with a unique combination of wood inlay, pens, and inkwells. Featuring intricate arabesque and geometric motifs, the box showcases archetypal Islamic patterns within an unorthodox artistic setting. Although meant to serve a utilitarian purpose — that is, to store a calligrapher’s tools — the box’s ornamentation also serves as an affirmation of the calligrapher’s social status. Despite these functions, the placement of such rich, vibrant decor within a storage device appears rather reminiscent of several European relics during the Middle Ages. For example, the Reliquary of Sainte-Foy, enriched with gold and gemstones, is revered for containing the skull of the Saint Faith — serving as an essential artifact for Christian pilgrims every year. Thus, while staying true to Islamic principles, this Spanish woodwork production may also consist of artistic traditions that have characterized European artworks in the Middle Ages.

In a dazzling display of contrasting colors, painter Muhammad Baqir’s Dancing Girl demonstrates the epitome of grandeur and beauty from 18th century Persia. Renowned as one of the most skilled artists of his time, Baqir developed this masterpiece using oil, watercolor, lacquer, and enamel. At face value, Baqir’s choice to represent his subject via painting is culturally taboo, as portraying humans or animate objects are profoundly uncommon in Islamic art. This can be mainly attributed to the central belief that only Allah Subhanahu Wa Ta’ala wields the power of creation, and any figural representations done by humans would contradict this premise. As a result, Muslim artists during Baqir’s time lacked the artistic repertoire to create three-dimensional beings. Hence, while Baqir defied cultural boundaries, the artwork does possess a relatively two-dimensional appearance that resembles Romanesque or Byzantine artworks. Despite this visual shortcoming, the painting does include artistic principles from the European Renaissance. Primarily, Baqir incorporates linear perspective in his background, as the bowl of pears emphasizes the recession in space between the Dancing Girl and the countertop behind her. In addition, Baqir developed his painting, which spans six feet in length, with a large size — another common characteristic in European artworks. Despite these visual parallels, Baqir stays true to his Persian roots, as the artwork includes arabesque patterns and ornamentation along the drapery, carpets, and clothing — creating for a unique painting that combines elements of Islamic and European traditions.

Taken together, through an assessment of three unique artworks — A Galleon at Sea, the Scribe’s Box, and Dancing Girl — Houston’s Museum of Fine Arts has not only affirmed the beauty but also the diversity that has become characteristic of Islamic art.