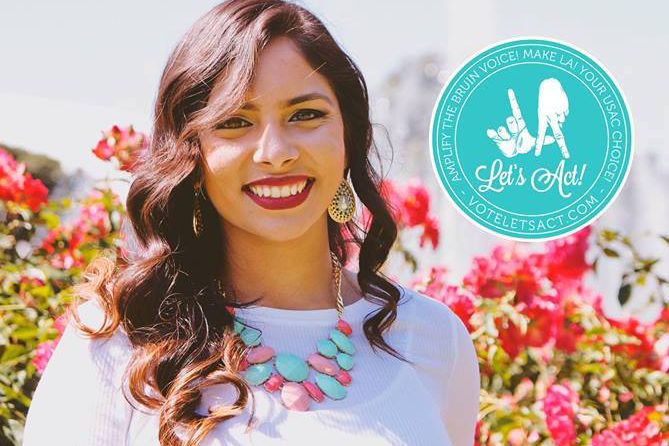 Al-Talib Newsmagazine endorses Aaliya Khan in this year’s USAC elections. We believe her leadership experience in student organizations and USAC, as well as her platforms, make her the strongest candidate running for Gen Rep.

Aaliya co-founded Chai Talks, a series of events that establish a safe space to discuss social justice issues impacting the South Asian community; and as Multicultural Engagement Director in the Gen Rep 1 Office, Aaliya continued this program with success. The Daily Bruin recently praised Chai Talks in their USAC evaluations , “The office’s Chai Talks on topics including sexual assault and domestic violence proved an effective strategy to stimulate conversation on sensitive issues between faculty and students.”

Recently, the Campus Events Commission (CEC) hosted a free screening of the film American Sniper, despite protest on the event’s Facebook page by dozens of students who felt screening the film would perpetuate anti-Muslim and anti-Arab sentiments on campus. The decision to screen this problematic movie comes during a time of increased anti-Muslim animosity in the US. It was only a little over 2 months ago when three Muslim college students–Deah Shaddy Barakat, 23, Yusor Mohammad, 21, and her 19-year-old sister, Razan Abu-Salha–were murdered because of their faith. However despite the safety concerns of Muslim students (read: anti-Muslim incidents since the Chapel Hill murders) the film was still screened.

Muslim voices were silenced, and this became another example in which the safety concerns of students were ignored.

Aaliya experienced the ways in which anti-Muslim rhetoric is tolerated on this campus firsthand at the USAC endorsement hearing on April 19. Before Aaliya could even finish saying her name, a man in the audience stood up and yelled, “You are Muslim and you do not represent me!”

In a statement Aaliya said, “I was the only Muslim candidate on that stage and the only candidate the whole night that was interrupted and attacked in such an outward manner. It was very triggering because this man’s screaming could have resulted in so much more, and it was hurtful no one chose to interrupt or stop him.”

But we believe Aaliya’s platforms will challenge anti-Muslim sentiments on this campus and build bridges between communities.

Aaliya’s platforms (more info at the end of the article):

This last point is of particular importance to Muslim students and employees on campus. Despite the Muslim Student Association being one of the largest student groups at UCLA, administration has yet to provide an indoor space to perform daily prayers. For sixty years, Muslims have prayed behind Kerckhoff in the hot summer heat and even in the rain, and so Aaliya’s platform to create a “Faith-Full: Non-Denominational Prayer and Meditation Space” is something that would especially impact Muslims on a daily basis. Additionally, it will be a safe space for interfaith conversations and a place that promotes mental well-being for all students.

Not only will she be the Muslim voice on council, but she will be an advocate for all communities on campus. As co-founder of Chai Talks, she has been a vital factor in creating a space for South Asians to voice their issues within their communities and at UCLA. And being the Multicultural Engagement Director in the current Gen Rep 1 Office and a representative in the Asian Pacific Coalition, she understands the importance of raising awareness about issues of social justice for communities of color and knows how to mobilize and bring diverse students together. Aaliya’s “Hungry for Change!” campaign will build bridges between communities of different cultures through regular night food markets where they can learn and share ideas, concerns, and seek support from one another and eat food!

Al-Talib endorses Aaliya because we believe that her leadership experience, own personal experiences as a Muslim and South Asian womxn, and her platforms make her the strongest candidate running for Gen Rep. We urge you to vote Aaliya Khan starting Monday because it is important to have a representative on council who is committed to advocating for the needs of Muslim students, and making UCLA a safer and more inclusive environment for everyone.

– Director, Development for UCLA Fellowship for International Service and Health

Faith-Full: Non-Denominational Prayer and Meditation Space–There is no proper community or prayer space on campus that provides a safe environment for all faiths and individuals.I will advocate for a permanent space that can provide an outlet for students to take time for themselves to focus on their mental health, interfaith conversation and activities, as well as yoga and meditation practices.

Hungry for Change!–Often times, there is a lack of cross cultural and community building on our campus. By establishing regular night markets catered towards specific communities, students will have the opportunity to learn about different cultures through the best way possible: food!

H.E.A.L.: Health, Empowerment, Advocacy, and Learning–There is still a very large stigma around mental helath for communities of color and under-represented communities. I will work with the Counseling and Psychological Services to provide culturally competent counselors especially from communities that are affected the most.

Peer “Edventures”–The transition into UCLA for most first years and transfers is the most difficult time they will endure on this campus. I will establish a peer mentorship program available to all first years, second years, and transfers that would help ease this transition and help them create long-term academic goals, community involvement goals, through the help of experienced third and fourth years.