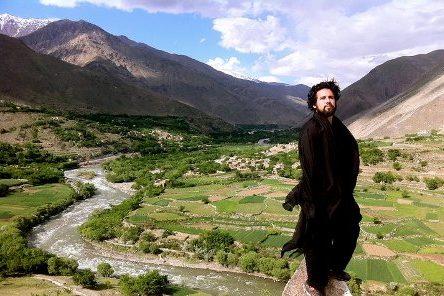 Al-Talib interviews Salmon Hossein on his experience growing up as an Afghan American post 9/11. Hossein is a recent UCLA graduate who is now pursuing a Masters of Public Policy at Harvard University.

That morning I happened to wake up a little earlier, and I’m sitting down in front of the TV and there’s smoke billowing from one of the Twin Towers so I’m like “Mom! Mom! Come look at this!” So while we’re watching the broadcast and while I’m eating my breakfast, the second plane hits and that’s when we knew like ok, something serious is happening here. I just remember that morning so vividly.

A-T: How do you think it impacted you growing up?

Hossein: In terms of national history, it’s probably one of, if not the most important thing that happened to me, more than the war in Afghanistan, because I was ridiculed a lot when I went to school.

It was my second day at school and the kids barely knew me to begin with. And on top of that, I happened to be an Afghan-American. So they kept calling me “Afghanistan” to a point where I didn’t think they even knew my name.

It affected me on multiple fronts because I was Muslim, and Islam was being attacked. I was Afghan, and Afghanistan was the first country that was invaded. And lastly, my last name is Hossein. So as if being Muslim and Afghan wasn’t enough, I happen to have the same last name as Iraq’s dictator. I was like the living, walking, talking Axis of Evil in one.

And it really hurt me because I didn’t know how to respond to it, I was only in 8th grade. I went through an identity crisis. I would actually try reasoning with them “I was born and raised in California, I don’t know any of them” or “that’s not what I believe. If I believed any of it I wouldn’t be living here.”

Soon enough I realized these people weren’t listening and they were just making more fun of me. And that’s when I started to develop a sense of humor and try to mentally take what they say lightly. It almost changed my personality. Before that I was this geeky nerd and after that I realized I could use humor and personal relationships with people.

A-T: How about today, do you think 9/11 influenced your interaction with non-Muslims?

Hossein: Today I think I’m very aware of my interactions with non-Muslims, especially if they know my faith. If I’m one of the only Muslims they know, I have to put on a good show and represent Islam to them. Not put on a show as in be fake, but if I’m this temperamental, angry guy, I fit into the media stereotypes that are hammered into them every day.

But if I’m this guy that’s working for social justice, devoting my life to public service, or I’m friendly with them, then I hope that they’ll take away that not all Muslims are like this, in fact, most are like Salmon.

A-T: What about your identity? How was that impacted?

Hossein: At first, I was so typecast as “the other,” “the minority,” “the Muslim,” that I fell prey to it, that when people asked me what I am I would say that I’m Afghan. But that changed over time because I realized that no, I’m American. I was born in California, raised in California, went to school in California, lived 23 years of my life in California and only this year did I spend five months in Afghanistan. So I’m as Californian and as American as the person next to me. That’s something I hadn’t come to terms with until recently.

A-T: You want to dedicate your life to fighting poverty and other social issues. Given the conflicts going on in Afghanistan even before 9/11, what led you to this path?

Hossein: Before 9/11 I cared a lot about Afghanistan because I had learned so much about what my parents had gone through for me to be in America today and how one small change in their escape story could have either meant death for them or them not ending up in America. And if they didn’t end up in America they wouldn’t have met each other and my sister and I wouldn’t be here today.

So because I understood how privileged we were I cared a lot about Afghanistan and the issue of poverty around the world.

But 9/11 made me look into the political and societal ramifications of being a Muslim. Before that, it was a very private faith for me. It was something we did in our family, behind closed doors amongst relatives and friends. It wasn’t something that I needed to talk about. But after 9/11 I realized I have to justify my faith and justify my beliefs. I had to defend it against people who were ignorant.

So it did influence me. Because of that bigotry, because my patriotism was questioned, my faith was demonized, the very freedoms, honor and respect that my family sought in the United States was no longer being afforded to them, I wanted to enter law, policy and government and put an end to that. Because I believe that what America stands for, its truest ideals are in conjunction with the Islamic faith because both preach and promote freedom, justice, and liberty for all, and the pursuit of happiness and equality for everybody.

Photo: Salmon Hossein on his first visit to Afghanistan in 2011.