Growing up Muslim post 9/11: Proud to be an Arab-American 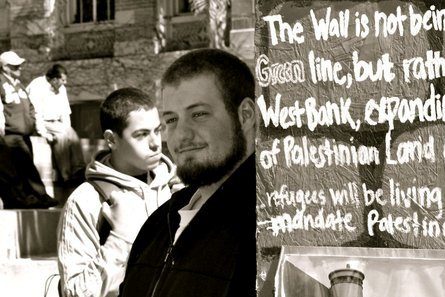 Al-Talib interviews Kutibh Chihabi, a fourth year Neuroscience major at UCLA, on his experience growing up as a Muslim and Arab American.

A-T : After 9/11, did you start seeing changes in either the Muslim community or the Non-Muslim community? Did you notice that people are friendlier or more to themselves?

Chihabi : I remember that my 6th grade teacher was very political person, always talking about the Middle East and always like talking about the US search for oil. He was probably one of those people who didn’t really like Arabs, sometimes saying really derogatory things. He would encourage us to watch the news every night and educate ourselves about current events. I still remember my best friend’s mom was actually supporting my mom, making sure to make clear to others that there was nothing wrong with our being Muslim.

With regards to the Muslim community, I remember going to the Mission Viejo Masjid [Mosque] Sunday program, but a lot of people dropped out, including myself. The Muslims were disassociating with it. With regards to the Non-Muslim community, I remember there was a lot of pride, so everyone was buying flags here and there. I think the country came together very quickly and the people bonded much more.

A-T: Do you think that has affected your own life?

Chihabi: It definitely has because for a while we had stopped seeing our friends that we would normally see because we would always go to the same events with the Muslim community. At the same time, I felt more sheltered from the Muslim community but I wasn’t necessarily unaware of things. When I started to learn more about Islam during my freshmen year of college, I remembered a lot of things that I had learned a long time ago, but I felt like there was a disconnect, something changed.

A-T: Did you feel the negative ramifications on Muslims?

Chihabi: Definitely, there was a lot of stereotyping going on. People didn’t necessarily go out of their way to say things to me, but they would make it a habit to let me know that they don’t like me. I remember this random kid in 7th grade who suddenly started cursing at Muslims for no apparent reason. I know that Muslims were harassed more in different areas and places, but I definitely experienced a detachment from the community on campus as well.

A-T: Did it ever make you not want to be Muslim or Arab? Did it make you ashamed at all?

Chihabi: No, not really. I’ve always been that stubborn guy, in fact if anything it has made me more proud.

A-T: How do you think 9/11 changed things for our generation?

Chihabi: In terms of the general society, I think there are a lot of people wondering just out of curiosity why any religion would preach such things, which is very interesting because if you look at the statistics, we had a sharp rise in the number of converts to Islam after 9/11. This doesn’t make sense only if you assume that the extremists acted truly under their faith, which they did not. So people started researching the religion themselves and the rest is statistics. In terms of the Muslim community, it had a lot of negative impact at first, but now we are starting to re-assimilate into society and keeping less to ourselves. There had been a time where people were just afraid to associate with MSA (Muslim Student Association) on campus, but we now see that people are coming back.