Growing up Muslim post 9/11: Standing out in North Dakota 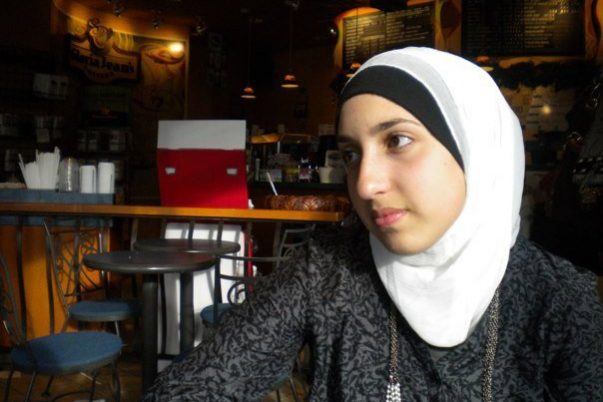 Al-Talib interviews Alaa Koleilat, a 3rd year Neuroscience major at UCLA, about her experience living in North Dakota after 9/11.

A-T: What was it like living in North Dakota as a Muslim?

Koleilat: So we have about 50 Muslims tops. For me, I didn’t feel the effects of the way Muslims were viewed in the US until later on. It wasn’t immediately after 9/11 because not everything about that, in terms of Osama bin Laden and everything, didn’t come out until later. So we weren’t as affected right away, but later on we really became affected.

I didn’t have any trouble wearing hijab until I got into high school. This is an incident that is really important for people to know about. When we went to take our younger sister to band camp, we took her to the International Peace Gardens in northern North Dakota. And to go there we don’t need to cross the Canadian border, you are still in North Dakota.

Coming back after dropping her, we stopped at a station where they just needed to check your ID. So what happened was that they asked us for our ID and then they told us to pull over.

We were just like, “Why do we need to have our passports?” We gave them the passports and just waited there outside in the heat, waiting and waiting. We were asking one security guard questions, “Why did they stop us? What’s so different about us? They don’t need our passports to go through.”

That is exactly what racial profiling is except that it’s not out in the open, it’s ‘hush hush’.

Even when we travel –at the Bismarck airport –even though people know me and my family, they still look at me really weird when I go on the plane and when I have a carry-on.

Most people just ask me question like why I wear hijab. But you do get those ignorant people that don’t know and that don’t want to know. My mom gives presentations at elementary school and one kid asked her later if she was related to Osama bin Laden. It is ignorance to certain extent.

So it’s a turning point for the better, the way people view us is different but that just gives us a bigger role and will force Muslims to be active in community, to be active in schools and the public schools especially…to not stick within our Muslim bubble, our own community. We need to branch out, we need to expose the United States –Americans –to the good in Islam. They’ve only seen certain people twist certain things and justify it and then people will take that for Islam.

A-T: What about the future. Where do you think things are headed for Muslim Americans?

Koleilat: I think we have a bright future but I think we also have a lot to live up to. I don’t know if we have seen the worse of Islamophobia or not. You think it would not get any worse and then a guy wants to burn a Quran. So I think we have a lot ahead of us and everybody needs to step it up. Muslims need to wake up and realize that we live in this country and that these problems aren’t going anywhere. Bridge the gaps. Give more presentations about Islam. Be more active in community.