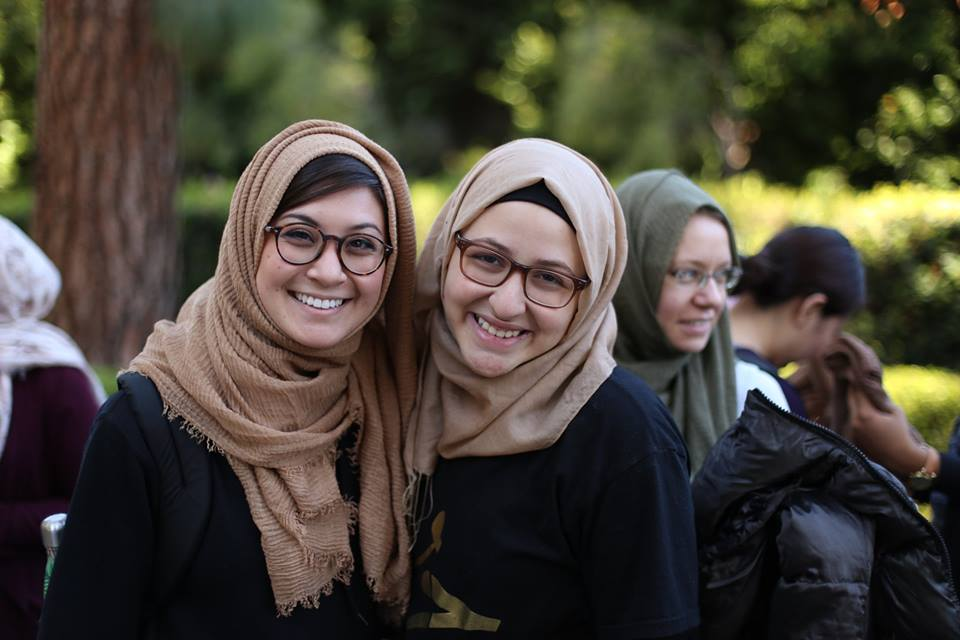 It is a Thursday morning, and Bruin Walk is filled with students wearing colorful headscarves and pins reading “SOLIDARITY with my SISTERS in HIJAB.” This marks the start of Hijab Day, an annual event that is a part of UCLA MSA’s Islam Appreciation Week. At a morning orientation, participants receive free headscarves, sponsored by LA-based scarf brand Austere Attire, to wear on campus all day. They then attend a reflection event in the evening to recount their experience. The participants receive info cards that explain what they are wearing and why they are wearing it so that they can answer possible questions brought up during the day. Male participants and those who choose not to wear the headscarf receive a pin to show their solidarity with Muslim women. Headscarf distributions started at around 8:30 a.m., and all 200 of them were given away before 10:30 a.m.

The event was organized by a group of volunteers led by Marya Ayloush, a third year Chicana/o Studies major and CEO of Austere Attire. When asked what she hopes the participants will get out of the Hijab Day experience, Ayloush hopes that “from this day forward, [they will] remember that they stood behind Muslim women. If they see a Muslim woman being harassed, they can support her. These people have networks of hundreds and thousands, and they can stand in solidarity with Muslim women.”

Students at the morning orientation had various reasons for participating in the event. Christine Lee, a third year statistics major, heard about the event through her Muslim friend, who sent her an invite on Facebook. “It’s not a symbol of oppression. I think that’s important for people to know,” said Lee. When asked what she hopes to gain from this experience, she answered, “I’m gonna wear the hijab today to spread awareness. When I walk back to The Hill,  I hope people will ask me questions about what I’m wearing. I even took a bunch of flyers to hand out to them.”

Taylor-Rain Coleman, a first year undeclared life science major, learned about Hijab Day after seeing a flyer in a dining hall. She snapped a picture and sent it to a group chat, inviting them to participate with her. “The current political climate is really toxic and Islamophobic,” said Coleman, “It’s important to show that we can support each other.”

Rachel Kuria, a fourth year political science major, was initially unsure about trying on the headscarf for fear of cultural appropriation and of not fully understanding the religious meaning behind the garment. However, she finally decided to try it, after realizing that it was a way to feel what Muslim women who wear headscarves go through. When asked what she hopes to gain out of this experience, Kuria took a long pause and said, “I want more of an understanding of what it means to be in solidarity. I think I’m still trying to figure that out.”

At 6:00 p.m., the participants reconvened in Dodd Hall, where they would reflect on their experiences that day. The event had four panelists: Aisha Sleiman, Bilqis Kulungu, Noor Bala, and Rida Hamida. Each panelist talked about her experience as Muslim women wearing the hijab. These experiences ranged from the beauty and struggle of being a black Muslim, wearing the hijab in a professional work environment, serving the nation while wearing the hijab, and the politicized stigmas of wearing the hijab. The evening also included a spoken word portion, where Dania Ayah Alkhouli read her poems about the intersectionality of being a Syrian American woman and a survivor of domestic violence.

During the panel, an audience member asked what the word “hijabi” means. This simple question led to an important discussion of the meaning of the word “hijab”. The word “hijabi” refers to someone who wears the hijab. Kulungu brought up the point that while “hijab” is commonly used to refer to the headscarf, it really means “veil” or “covering,” and someone who does not wear a headscarf can still be considered a hijabi. Bala said she prefers the term “woman who wears a hijab” to the label “hijabi” because “hijabi” groups individual Muslim women into a singular, often stereotypical, category.

After the panel, several Hijab Day participants spoke about their experience wearing the hijab for a day. One of Ayloush’s classmates who came to the orientation portion could not make it to the reflection portion, but texted Ayloush her thoughts, which were read aloud to the audience: “I walked into my class after leaving the hijab table, and a white girl behind me…asked me if I was participating in Hijab Day…she immediately started to tear up. When I asked her why she was crying, she said, ‘I’m not Muslim. I just think it’s so beautiful; the solidarity and seeing everybody wearing hijab is just so beautiful’…It’s not everyday that I bring someone to tears by my wardrobe, so thank you. I know this day made a huge impact on a lot of people, and I felt so honored to be a part of it.”

One participant came up to the podium and shared her story about how one of the biggest struggles of the day was keeping the slippery scarf from falling off of her head, which earned a chuckle from the audience. She joked that whoever puts on a headscarf every single day “must be miracle workers.” After going to the restroom to look up hijab tutorials on YouTube and still failing, she saw another girl on campus wearing the same type of scarf as her and asked for her help. In the rush of going to class, the girls did not catch each other’s names but were still able to help each other in solidarity.

Fatima Habib, a third year English major, recounted her experience as a Muslim woman who chooses not to wear the hijab every day. Habib was raised in a Pakistani family where not every woman covers her hair. She said that wearing the hijab “is a personal choice but can be a harder choice when family members don’t wear it.” She added that political tension makes a simple action such as covering one’s hair into an action that can be very difficult every single day.

Emmons McKinney, a fourth year geology major, posted a picture of herself in a headscarf on Facebook. The picture got numerous likes, which made her glad because her family in the Midwest would see that picture on their Facebook news feed. McKinney stated that since she’s a white person, she’s perceived as “safe” while Muslim women are not. Showing her Midwestern family the picture of her in hijab was a way to “bridge the gap” between perceptions of Muslim women and of non-Muslim women.