Hundreds Rally at UCLA in Solidarity with Mizzou 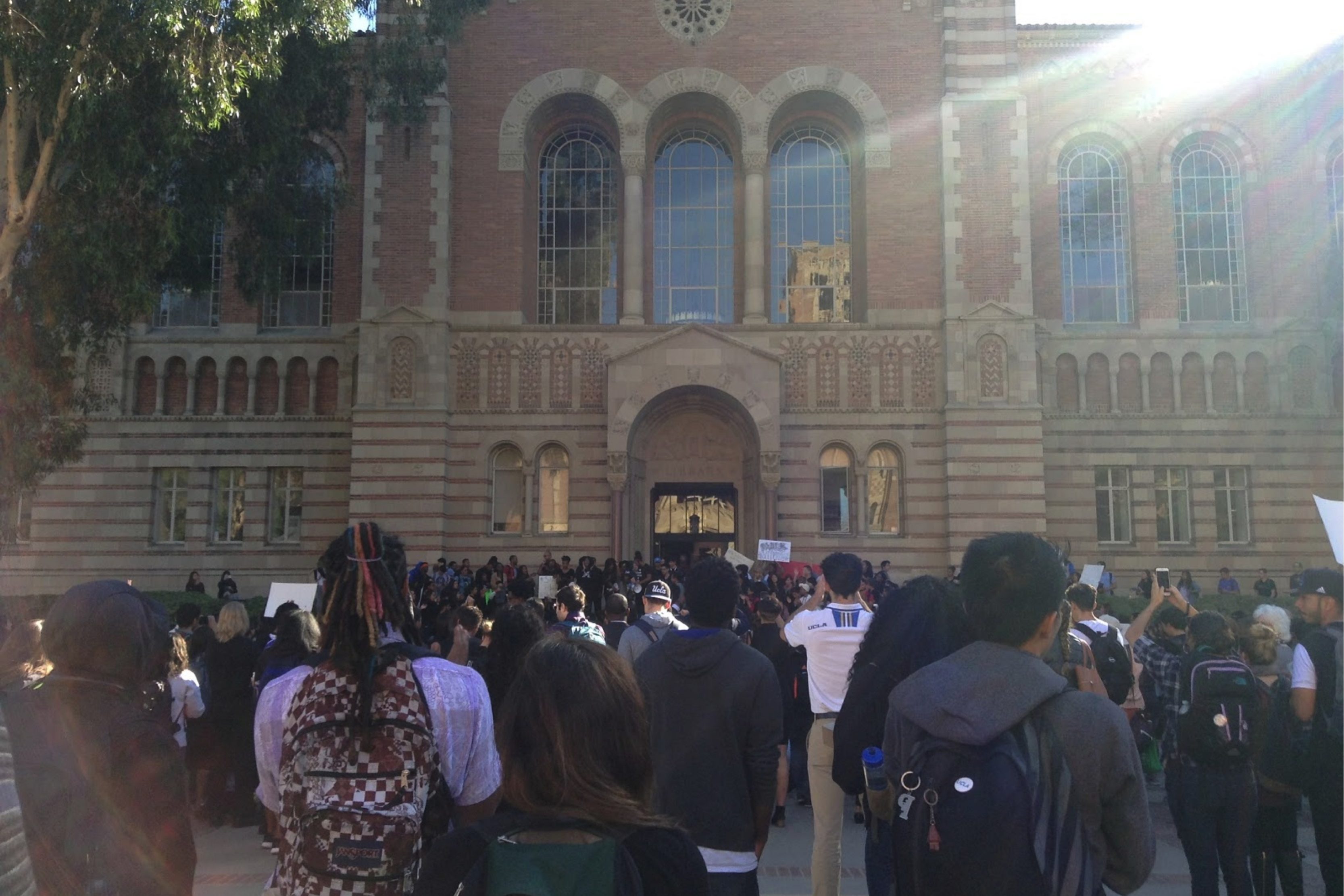 On Thursday November 12, the Afrikan Student Union (ASU) at UCLA organized a walkout and rally to express solidarity with students at Missouri University whose President resigned in the face of protest and strikes for not sufficiently responding to anti-Black terror on Mizzou’s campus.

Students walked out of their classes at 12:45pm, and the rally was held in front of Powell Library from 1:00pm to 2:00pm.

The rally was organized in response to a call to action to demonstrate in solidarity with Mizzou students. Janay Williams, fifth-year Ecology and Evolutionary Biology student and ASU chairperson, stated that, “The rally was a good way to show the collective power of black students at UCLA, and to create a space to discuss things that needed to be discussed.”

During the rally, attended by around 250 students, faculty, a handful of UCLA administrative officers, and at least one UCPD member, several representatives of ASU spoke, as well as other representatives of the Black community at UCLA. ASU’s Letter in Solidarity with Mizzou was released and read, and ASU at UCLA’s 10 Demands to UCLA Administration, released on October 23, were reread.

As there were many connections to be made between UCLA and Mizzou administration’s inability to prevent or crack down on racism on their respective campuses, warnings came from many speakers against attempts to placate the Black community without concession to any material demands. Faculty Member Peter Hudson said, “Don’t be seduced, don’t be silenced, don’t be bought off by the administration.” A representative of Black Lives Matter Los Angeles (BLMLA) noted that UCLA administration’s statement that they are “willing to engage with ASU in an ongoing dialogue” (without concession to ASU’s demands) is an act of “disrespect. This is an anti-Black, anti-Brown racism.” 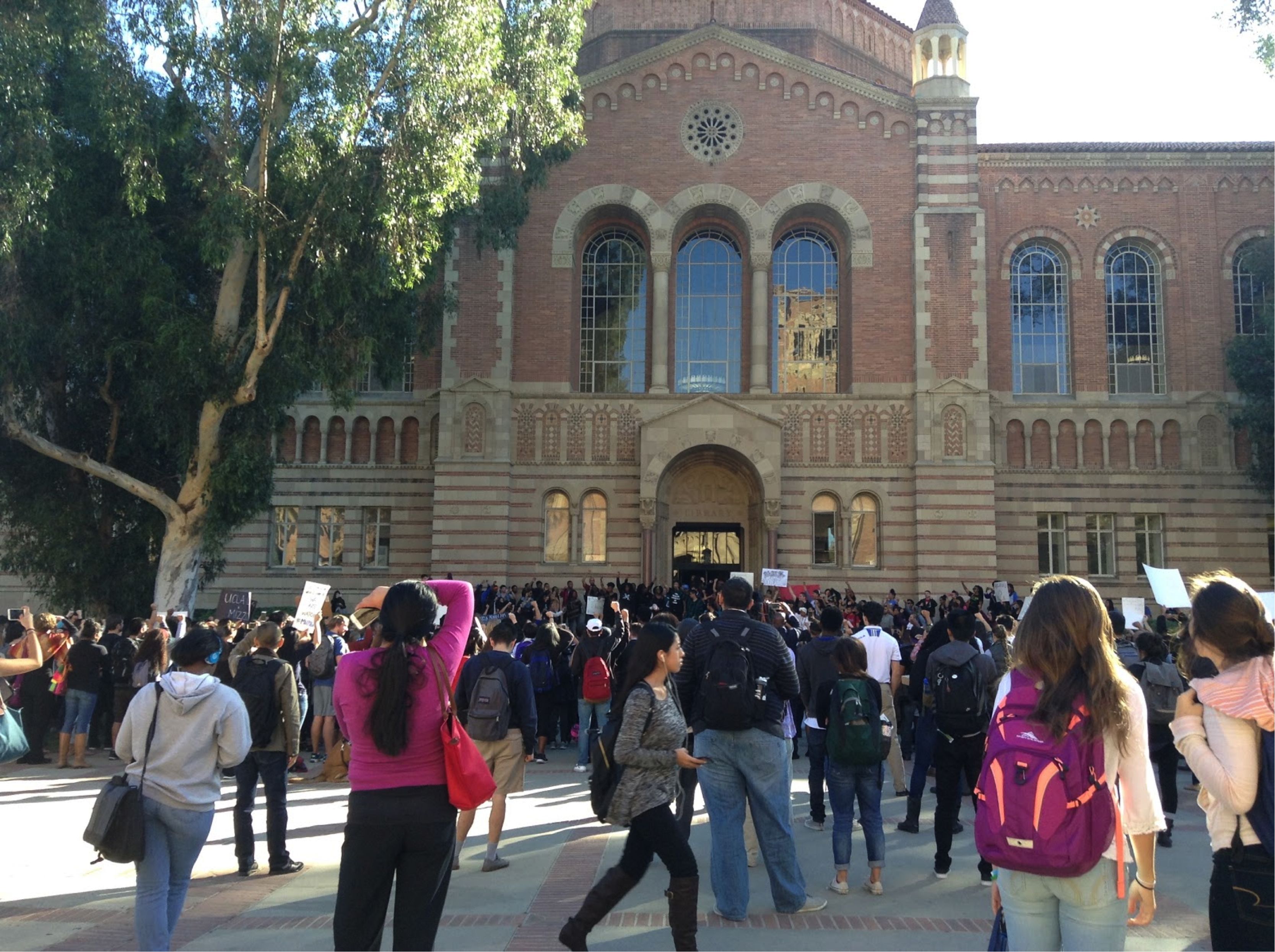 Attendants of the rally carried posters with hashtags #StudentBlackout, #BlackLivesMatter, #InSolidaritywithMizzou, and #BlackBruinsMatter, among others, printed on them. Chants that were used throughout the rally were: “Fired up! Can’t Take it No More!”, “Black Lives Matter! Black Bruins Matter!”, “They think it’s a game? They think it’s a joke! [referring to university administration’s complacency with white supremacy on campuses]”, “Hell No! We won’t go!”, and “We’re going to be alright.”

While Williams and ASU Internal Public Relations Coordinator Kya Lou were reading the organization’s 10 Demands, an unidentified person in the audience yelled “Stop taking our ****ing money!” likely in response to multiple demands that addressed the lack of sufficient resources for Black students at UCLA and demanded its correction. The unidentified person immediately received loud complaints from other members of the audience, then was ignored.

Damali Stennette, fourth-year Anthropology student, attended the rally because “it was really important to stand in solidarity with Mizzou and connect it with UCLA. It’s also represent different types of Black people coming from different backgrounds.” She felt that the rally would help create “a little bit of awareness. Even if TV reporters don’t come out, other media can stand in solidarity…we can continue and not forget about this.”

When asked about the applicability of tactics such as hunger strike and athletic team strike to combat racism at UCLA as has been done at Mizzou, Williams responded, “It’s going to be different here because we are a different campus and have a different climate, but we can use some of these tactics.”

The rally ended with the Assata Shakur chant (“It is our duty to fight for freedom. It is our duty to win. We must love and respect one another. We have nothing to lose but our chains.”) and an invitation to all interested to attend a teach-in on related events and trends on November 18 in Carnesale Commons at 7:00 pm.

Chakib Mouzaoui studies Mechanical Engineering at the University of California, Los Angeles at the sophomore level. A defector of the STEM supremacist project, he is also a Stephanie McMillan fan, a Richard Stallman fan, a Satoshi Kon fan, and a Prophet Muhammad (pbuh) fan.