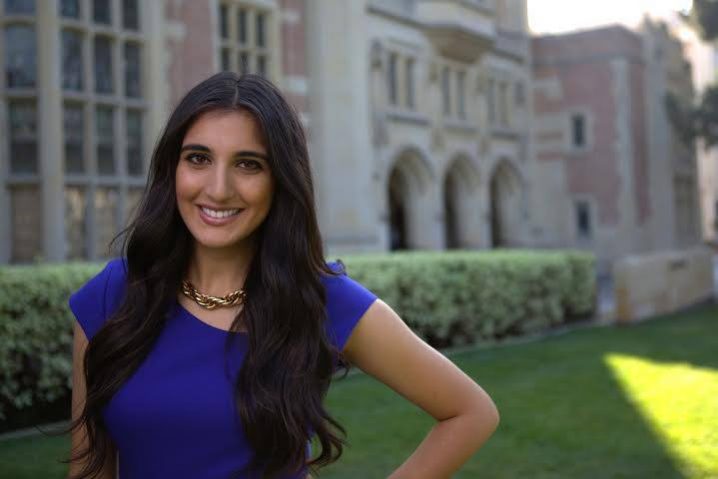 Al-Talib: Tell us a little bit about your background and what inspired you to run for General Representative?

Sofia: I transferred to UCLA a few years ago from Mount San Antonio College. A little bit about my background. Both my parents immigrated to the United States. My mother was born in Leon, Guanajuato, Mexico. She immigrated here when she was young because my grandmother suffered from various health problems. When they decided to move here permanently, they lost everything. My mother is of Spanish and Mexican descent.

My father came here when he was in his 20s to help my uncle get on his feet. As someone who worked in places like Zimbabwe and all over the Middle East for business, he was fortunate enough to establish himself as a businessman here, as well. My father was Pakistani and Iraqi.

I grew up in West Covina, California. My parents were always actively involved in our community, whether it was through city council or through our mosques. I grew up in a setting where my parents led by example. I saw the struggles they faced growing up in the states, but most importantly, how they overcame those obstacles. They became leaders in our communities and many looked up to them not only their humility, but for their passion and leadership. They definitely inspired my siblings and myself  to become leaders in our communities as well.

I always wanted to run for the General Representative position. There was never a doubt in my mind; however, I did not see any transfers ever make it to the council table, so I assumed that it could not be done. I remember telling my father that over 40% of undergraduates at UCLA are transfer students, yet that is not represented on the council table. He would tell me, “Just because it has not been done before does not mean it cannot be done. What are you going to do about it?”

This past summer, I lost my father to leukemia. Before his sudden death, I decided for sure that I wanted to run. After his death, I realized how short life really is. That is one of my main sources of motivation.

As a transfer student, who was in student government at my community college, what I saw at UCLA was quite different than what I saw in community college. I saw a lack of accountability and representation on the council table. Also, I saw a lack of professionalism from certain members. These members allowed their personal views to influence their decisions, instead of holding themselves accountable to make decisions that would benefit all students on campus.

Al-Talib:  What leadership roles have you held on campus that you think make you uniquely qualified for the position you are running for?

Sofia: I was actively involved throughout high school and community college. At Mt. SAC, I was involved in Student Government. I was a Budget Committee Member, a Business Committee member, and the Student Services Senator, where I represented over 65,000 students. I then ran to be on the Executive Board, the equivalent to USAC at UCLA, and I won! I received the title of Senate Chair but that Spring, I transferred to UCLA.

Coming to UCLA, I did not have access to many resources. I disliked having to travel from my apartment all the way to Campbell or Murphy to just turn in a form or get peer learning services. Having had extensive experience in community college, I can realize the necessary improvements UCLA needs to make.

Even though it was difficult to get involved at first, I have still made a name for myself and helped others while doing so. I interned with the Health Sciences Development; I was the Finance Committee Chair for ASUCLA Communications Board, I am the Internal President for GlobeMed at UCLA and I am the Director of Public Relations for MSA at UCLA. I was also the Marketing Chair for MSA UCLA College Day, an event put on to provide students of low socioeconomic status, both Muslim and Non-Muslim, with the chance to come to UCLA and learn about how they could become a student here, despite any obstacles they may face. We also provided them with mentors. To this day, I still keep in contact with my mentee, who hopes to come to UCLA next fall.

Al-Talib: What are your platforms and how will you achieve them?

Sofia: When it came to my platforms, I really had to think about what was necessary for our campus.

One of the main things I want to focus on is safety. UCLA is quickly becoming one of the most unsafe campuses in the country. For that reason, I plan to extend the CSO van service hours. At the moment, the vans only run until 11pm, when in reality, most students are out past 11pm and sexual assault, theft, and violence can occur after 11pm, but my platform does not stop there.

I have already spoken with Nancy Greenstein (Director of Police Community Services for UCPD) about updating the Diversity Sensitivity Training that officers must go through. It has not been updated in quite some time and there is a severe lack of community involvement. After I spoke to her, multiple communities like Afrikan Student Union and Muslim Student Association have now gotten involved. My platforms are not things that I am planning to do once I get elected, they are already in the process–so no one can say they are not possible.

I also feel that making the Hill a more centralized place on campus is important, especially for those living in apartments. Right now, there are no peer learning opportunities on the Hill. They are only open to athletes. I want to provide resources on the Hill to students and allow them to utilize them, whether they are in programs like AAP or not. That is something I am already in the process of doing as well.

Finally, I want to create an in-depth video series that would show students the diverse activism on this campus. Too many times we judge individuals for their religious beliefs, political beliefs, etc. This series would not only tell the stories of fellow Bruins on this campus, but more importantly, connect students with one another, allowing them to see the experiences that have impacted so many students to be who they are today.

Al-Talib: Lastly, how do you plan to advocate for traditionally oppressed communities at UCLA?

Sofia: I am actively involved in various traditionally oppressed communities. I believe reaching out to communities that one is a part of and also NOT a part of is very important.

One thing I was surprised by when reaching out to other communities, such as the Afrikan Student Union, was the realization that we are all going through similar issues on this campus. One of the goals of the Afrikan Student Union is to reduce acts of racial profiling on campus. As a Muslim womxn, I know what it feels like to be racially profiled. I have friends from other communities that have also experienced racial profiling, which is why I plan to prioritize safety if elected as Gen Rep.

As a General Representative, it is easy to get trapped in the “USAC Bubble”. It is easy to say that one has done so much for the community, when in reality, many do not even know the various communities on campus and their needs because they do not make the effort to reach out to them.

That will change when I am General Representative, inshAllah (God-willing), because I will continue to form relationships with underrepresented communities on campus and make sure they are a part of my office. I want a diverse group of students in my office and I plan to maintain strong connections with various communities on campus.

Editor’s note: Al-Talib Newsmagazine endorses Sofia Haq for General Representative because she is the most qualified candidate for the position. The Al-Talib editorial board believes Sofia’s various leadership experiences as a transfer student heavily involved in both her community college and UCLA will provide USAC with a fresh perspective to better address the needs of new and returning students. Additionally, Sofia’s meetings with administration to update the Diversity Sensitivity Training proves her commitment to accomplish campaign platforms and make UCLA a safer and more welcoming campus community for our diverse student body.