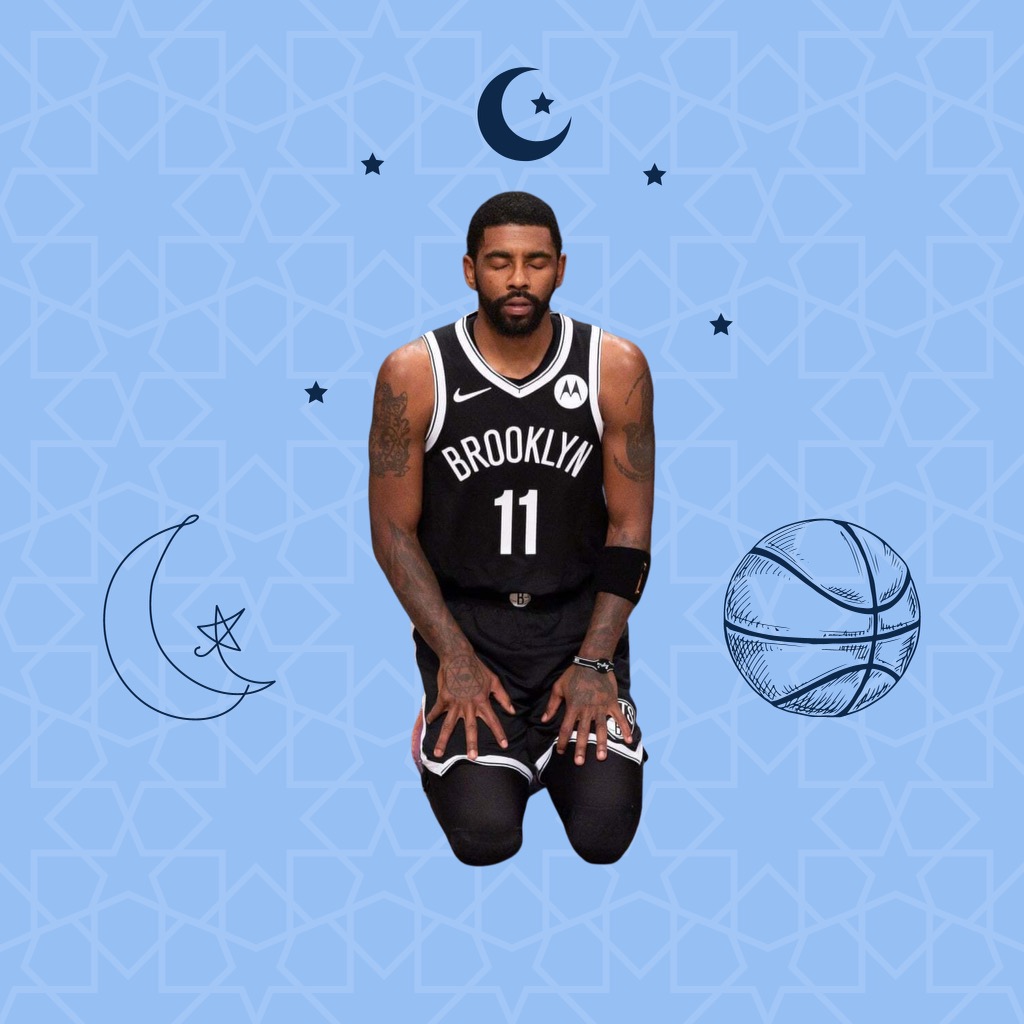 As a fellow Muslim and diehard NBA fan, I need to make myself clear when I say this: Leave. Kyrie. Alone. Never in my eight years of tuning into primetime basketball have I been this disappointed in the NBA community for its sheer display of ignorance. For those of you who haven’t heard by now, Kyrie Irving, a superstar point guard for the Brooklyn Nets, recently confirmed his commitment to the Islamic faith in a post-game conference. As a converted Muslim, he has been observing his first Ramadan, which–to no surprise–has been an “adjustment” for him. With that said, Irving has been intermittently sitting out games as a way of juggling his new religious responsibilities with the grit and grind of the NBA season.

Despite Kyrie’s religious intent, fans took exception to his recent absences, primarily because he had already missed a handful of games leading up to this point in the season. Furthermore, fans questioned the authenticity of Kyrie’s commitment to the Islamic faith, citing instances of him burning sage while paying homage to his Native American heritage. To that end, I must say: what exactly is the issue here? It’s common knowledge among the NBA community that Kyrie and his late mother, Elizabeth Irving, are enrolled members of the Standing Rock Sioux Tribe. Kyrie should have every right to appreciate a distinct branch of his family tree. Even if it isn’t “normal” protocol in the Islamic culture, acknowledging Native American roots shouldn’t make Kyrie any less Muslim than the people you stand shoulder-to-shoulder with for Jummah prayer. Sure, his cultural background may be uncommon, but we have to remember that uncommon isn’t necessarily synonymous with unacceptable. Until someone can point out the phrase “see unacceptable” under a dictionary entry for uncommon, we should all continue to do our best to respect Kyrie’s religious commitment.

Going back to the argument of missed games, Kyrie isn’t even the first player to make adjustments while observing Ramadan during the NBA season. The first athlete that comes to mind is Hall-of-Fame center Hakeem Olajuwon, who, even as a lifelong Muslim, abstained from fasting during game days for most of his career. It wasn’t until the 1995 season when Olajuwon followed the footsteps of fellow NBA All-Star Mahmoud Abdul-Rauf by fasting throughout the entire month of Ramadan irrespective of its overlap with the NBA season. Even for Olajuwon, adjusting to this regimen required him to dig deeper into his “spiritual mindset” to muster the energy to perform on a nightly basis. Regardless of the initial setbacks, Olajuwon amazed fans with many all-time great regular season performances that ultimately won him Player of the Month, which–to this day–is highly praised by the NBA community. To that end, I must ask: why should Kyrie, a recently converted Muslim, be treated any differently? As Kyrie continues along Olajuwon’s trajectory by growing into his religious obligations while outshining opponents game after game, fans and media personalities alike should at least consider cutting him some slack. Of course, as we all know, this has yet to be the case.

We can go on about the burned sage and missed games. Doing so, however, would omit the most compelling reason why the NBA community needs to hop off the Kyrie Irving hate train: diversity. In the grand scheme of things, athletes like Kyrie Irving play a massive role in representing the Muslim community in American popular culture. In the current NBA landscape, we have basketball players like Jaylen Brown, Jusuf Nurkic, and Enes Kanter also observing Ramadan this year. As Portland Trail Blazers center Enes Kanter can attest, a growing Muslim population in major sports leagues like the NBA can provide ample opportunities for teammates, coaching staff, and even the fans to learn more about Islam’s guiding principles. According to Kanter, when presented the opportunity, his teammates would never hesitate to ask questions about popularized aspects of the Islamic faith, whether it be about halal foods or alcohol restrictions. In one particular case, one of Kanter’s strength coaches was “so curious about Ramadan” that he fasted for three days alongside him to better understand his nutritional needs. Naturally, with increasing media coverage spotlighting these Muslim athletes, fans may even catch wind of the interactions like those Kanter spoke of. In due time, they too can undergo similar learning experiences by simply keeping up with their favorite players on a day-to-day basis. The fact that Kyrie Irving, a widely-known, multiple-time All-Star, confirmed his commitment to Islam entails that a significantly larger fanbase will, inevitably, reap the benefit of cultural diversity for the foreseeable future.