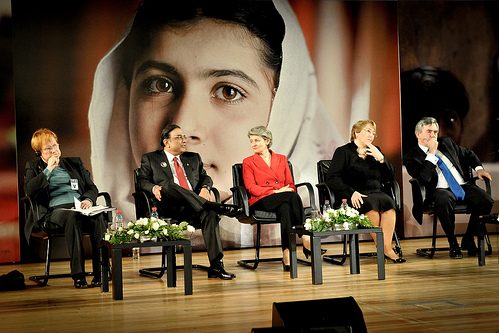 [dropcap]S[/dropcap]he seems to be the woman of the year. An entire day has been named after her. She’s been nominated for the Nobel Peace Prize. After having survived from gunshots fired by the Taliban, she’s seemingly become the spokeswoman for girls’ education in underdeveloped societies. Only 16 years old, her name is Malala Yousafzai.

However, while many admire and appreciate her success, reception of Malala is mixed. Journalists such as Assed Baig or Sofia Ahmed respectively claim the West has “hijacked Malala’s message,”or that she is “being exploited by the West and its stooges.” Others on social media have spread a letter allegedly written by a Taliban leader addressed to Malala, with some conspiracy theorists going so far as to say that Malala is a CIA agent in the working.

Despite all that, there lie several problems with the rhetoric and discourse expressed by people such as Assed Baig or Sofia Ahmed. In their finger-pointing at the West, they almost undermine and fail to acknowledge Malala’s accomplishments or message. Baig at least directly mentions that: “There is no justifying the brutal actions of the Taliban,” and that he “…support[s] Malala, [and] support[s] the right to education for all.” However, Ahmed’s rants seem to imply that she is upset and frustrated at the fact Malala received a platform of influence from the West,  because other girls like Malala are “…sold to the highest bidders in order to be raped, tortured and kept in a metal cage.”

This type of discourse and rhetoric highlights a larger issue in the overall western Muslim community. There lies an innate anti-white, leftist-victim-mentality, and inferiority complex amongst Muslims when they continually blame the West, as if the West is wholly responsible for every single tragedy around the world. They speak as if the West is a single, monolithic entity with united fronts and opinions.  They fail to understand “the West” including its media, society, and government, is comprised of a multitude of groups that are often at odds with one another. As a result, instead of identifying specific individuals or groups operating in “the West,” Muslims end up blaming the entire “West.”

This West-blaming has led me to two observations. What I find interesting is how Muslims utilize the West as a scapegoat for their problems in the very same manner they argue the West is utilizing Malala to justify its moral crusade. What I found ironic is how  certain Western elements have  entailed Muslims with some privileges, such as the very  privilege that enables Muslims to point fingers at and blame “the West.”

This inferiority complex has caused Muslims to see the glass as half-empty rather than being half-full. While it is true there are hundreds of other Malalas who have been killed and silenced by the U.S. through its drone program,  why are we not unable to  view Malala Yousafzai as the representative of these silenced and forgotten voices? She herself in a recent meeting with Obama has stated how she “…expressed [her] concerns that drone attacks are fueling terrorism. Innocent victims are killed in these acts, and they lead to resentment among the Pakistani people.” If not for the platforms and voice given to her by certain Western outlets, how else would she or any other Malala be able to voice such opinions worldwide? 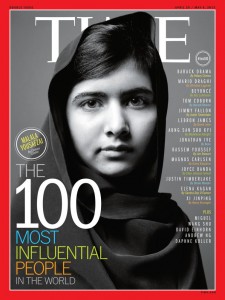 The West is not free of errors or misdeeds. There is no doubt that certain Western media outlets are utilizing Malala’s story in order to justify  the U.S. military’s moral crusade in areas of Afghanistan or Pakistan. However, a fine line must be drawn between criticizing how specific media outlets are handling her story or the atrocities committed by the U.S. military versus ousting the entire “West” parading her like a puppet on strings. The latter view dangerously and implicitly strips Malala of her individuality and personality.

Malala herself has recently responded to such criticisms accusing her of being a “Western puppet.” In an interview with BBC television, the teenager has reaffirmed her Pakistani identity and pride. She also repeated her vision of bringing education to children in poverty-stricken and war-torn nations around the world. Lastly, Malala stated that she wants to be a leader in Pakistan, and not “the West,” because she does not ” want to be a politician in a country which is already developed.”

In closing, rather than continually blaming and attacking the West for every single problem, we as a Muslim community should strive to be thankful for the privileges the West has entailed us, while criticizing it objectively at the same time. Externally, we need to stop West-goating, and instead utilize some of the privileges given to us by certain Western elements for political activism, action, and lobbying.  Internally,  we need to shed our inferiority complex and victim mentality, and create our own voice regarding people such as Malala Yousafzai.