Reflections from the Muslim-Buddhist Mixer 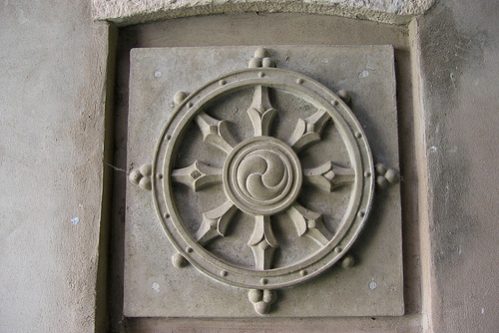 “The Lunar-Dharmacakra Mixer.” This phrase emerged into my mind when I first heard about the upcoming Muslim-Buddhist Mixer from the Dawah (formally known as “Muslim Union”) subgroup of UCLA’s Muslim Students Association.

“Lunar” referred to the moon or the pseudo-symbol of Islam adopted since the reign of the Ottoman Empire. From my prior knowledge of Buddhism, I knew that the “Dharmacakra” was the wheel with eight spokes, and also one of the central symbols of Buddhism.

I had initially visualized the Mixer as some type of Dharmacakra emitting moonlight, and was looking forward to attending in order to speak about my own faith while learning more about another. However…

…I had made a near-fatal error. While the timing for the Lunar-Dharmacakra to spin would be precisely at 5 PM, I had miscalculated and instead arrived near an hour late at 6 PM. My delay had caused a slightly unfortunate downside.

The “Lunar-Dharmacakra” Mixer was planned to spin both ways clockwise and counter-clockwise. However, they had already spun clockwise, and it was now time to spin counter-clockwise. Instead of learning more about Buddhism, my plans changed, and I ended up speaking as much as I could about my own faith in order to make up for the delay.

However, mixing and spinning in only one direction was satisfying nonetheless. While I had some “experience” in dawah on the electronic ocean of the Internet, this time I was speaking live to people without any veil of anonymity.

Whether it was the concept of Tawheed  (Unity of God), the five pillars of Islam, lowering thy gaze, or reciting the Ayah Al Kursi,  not only was I conveying shards of knowledge to someone else, but I felt the shards within myself resonating and reminding of what I already knew and learned.

From this “Lunar-Dharmacakra” Mixer, I learned one very important lesson: Giving dawah is not only a process of teaching others, but it is also a process of reminding yourself of what you already know. It is a process of rekindling knowledge’s flame inside, while letting its sparks fly off outside.