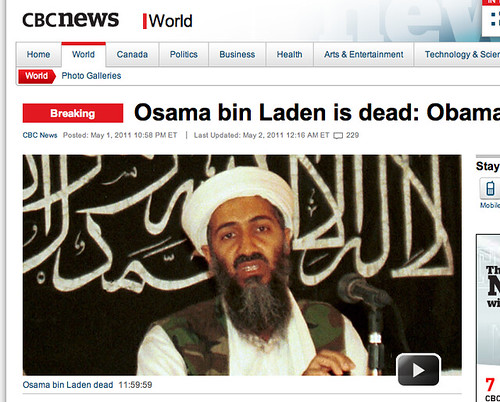 “OSAMA BIN LADEN DEAD, BODY IN US CUSTODY,” read the large block letters beneath President Obama’s face. The President’s measured words spilled about me and echoes back up from the downstairs TV.

My family was relaxing. We’d all had a lazy Sunday, so we decided to catch a late dinner, and we were all doing our own thing. Dad was watching the playoffs downstairs. I was relaxing. My brother was cranking his music.

Mom decided to turn on the TV – at maybe 8:15pm – when she called out that President Obama’s on TV, giving a speech. So I popped over to my parents’ bedroom. Fifteen minutes later, I was so shocked I couldn’t make out a thing I heard.

I still can’t quite recall what was said. Something about “justice” and “never forgot” and “closure.” But really, has there been? What does Osama bin Laden’s death mean?

His death certainly caused ripples in our house.

My mom is a fairly gentle person. Yet the first words out of her mouth: “Good riddance. What a horrible man.” This one man caused so much grief to so many people, she said, that she couldn’t feel any sadness or concern upon his death.

Dad agreed that, no doubt, Bin Laden was horrible. But, he reminded, the US had had a hand in creating that Osama Bin Laden. Better to learn from it, and not make the same mistake again. That said, he couldn’t feel sorry that he was dead.

My younger brother surprised me with some of his later comments. He called Osama Bin Laden “the human tragic figure” – man gone horribly wrong. He was tragic because he had some good qualities (“though that in no way redeems his evil deeds”).

He was horrifying because his good qualities existed side by side “with a ruthlessness and horrific baseness.” Bin Laden had a cannibalistic capacity to devour human life, he stated. But the horror and tragedy, again, lay in Bin Laden’s lingering human characteristics amidst the growing inhumane, in the fall of a human to a monster.

If only Bin Laden had fueled his actions for the good.

Ain’t that the truth. The frantic celebration at the death of a man, however loathed, is the human tragedy my bro mentioned. How horrifying to think that this man, even in death, can bring out the basest emotion in us. How mortifying that he has such influence with us. Instead of wallowing in triumphant vengeance, perhaps we should reflect.

What has Osama Bin Laden’s death really accomplished? It won’t bring back the dead: the soldiers, the civilians, the emergency workers and volunteers. It won’t heal the maimed, be they people, families, or countries. Can his death account for the indefinitely detained and the unlawfully tortured? Will it bring back our sense of safety? Our freedoms?

It won’t erase my terrible experiences post-9/11, or bury my resentment. In fact, I resent him all the more for my joy at his death. The revelry at his death is sick. I refuse to rejoice in death and bloodshed.

No one knows whether his death will really make meaningful change, anyway. Better to refuse to succumb to such savagery, and put our energy into what is relevant.