The Double Standard of Race in American Protest 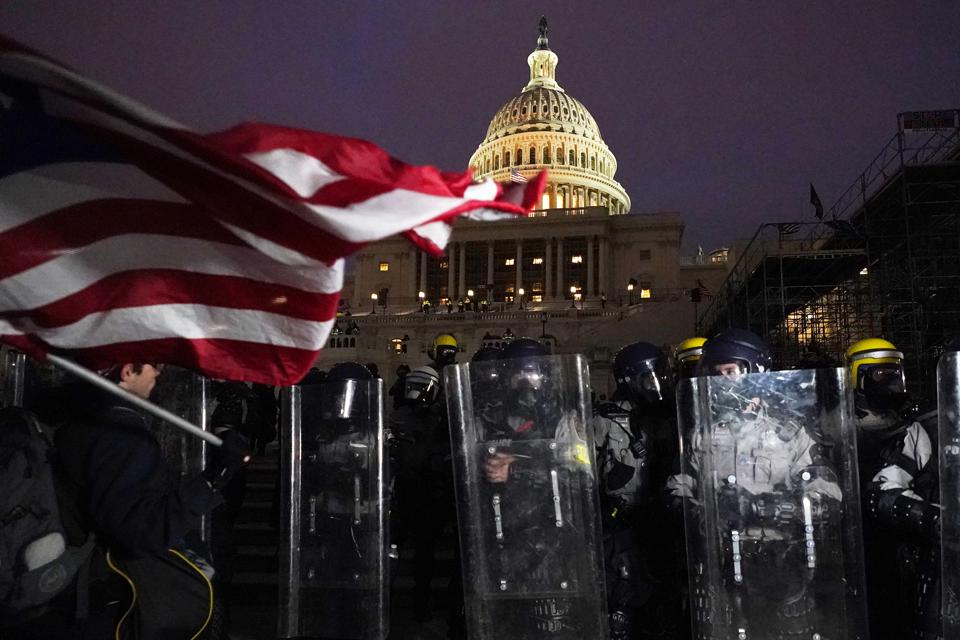 Police stand outside the Capitol after a day of rioting protesters, Wednesday, Jan. 6, 2021, at the Capitol in Washington. (AP Photo/Julio Cortez – Associated Press)

POV: You’re a typical college student. Today is January 6, 2021. It’s 10 AM. You wake up to the sound of your default alarm blasting from your iPhone perched across the room. As you slowly trudge out of bed–groggy-eyed and hair in disarray in all likelihood–the same questions run through your head. Did I just sleep through another 8 AM Zoom lecture? Yes, yes I did. Should I question for the 50th time what my tuition is actually paying for? Probably. COVID-19 cases continue to rise with no foreseeable end in sight? Business as usual. Disgruntled Trump supporters storm the Capitol simply because they cannot accept an election outcome? Now that’s a first.

By now, we’ve all seen the footage of crowds overpowering feeble barricades along the Capitol’s perimeter and of the once empty rotunda bustling with flag-hoisting supporters fully decked in Trump memorabilia. Or perhaps you’ve seen the images of protestors walking off with podiums or sifting through stacks of confidential documents, all of which, of course, have been featured in countless memes that you’ve almost certainly seen on your Instagram feed. As easy as it is to fixate our attention on these displays of sheer lunacy, this “protest” must not be taken lightly in the grand scheme of racial politics. Beyond the visuals I’ve mentioned, the Capitol raid has unquestionably publicized the double standard of race in the American protest tradition, particularly in regards to the treatment of protestors by local and federal authorities.

To unravel this claim, let’s first rewind back to May 25, 2020, a day that propelled this notion of racialized violence and, subsequently, the Black Lives Matter onto the national stage. On this fateful day, our nation lost George Floyd, a man ruthlessly choked to death by the knee of Minneapolis police officer Derek Chauvin for a mere counterfeit charge. Floyd’s tragic passing, in a greater sociological context, would become one among roughly 1100 people extrajudicially murdered by police that year, a disproportionate amount of whom were Black. In the weeks that followed, millions nationwide took to the streets of Portland, Minneapolis, Seattle, Atlanta, and other metropolitan cities to voice their frustrations at such appalling brutality, only to be met with a whole brigade of police squadrons, tear gas, K9 units, flash bangs–you name it.

With this level of resistance, one may quickly assume that these demonstrations were violent in nature. After all, how else can we explain the numerous riots that news outlets were so hasty to report? The truth of the matter is, however, that the extent of violence involved in these BLM protests has been gravely overstated. According to a report by the Armed Conflict Location & Event Data Project (ACLED), over 93% of the 7750 Black Lives Matter demonstrations that took place between May 26 and August 22, 2020 were considered peaceful. Peaceful, as defined by the report, refers to the absence of “violent demonstrations,” which includes “acts targeting other individuals, property, businesses” and other nearby protesting groups. A supplemental study conducted by the Radcliffe Institute for Advanced Study at Harvard University only affirms these findings, claiming that roughly 96.3% of the 7305 protests surveyed involved no property damage or other violent demonstrations towards police officers. If anything, as the study further claims, “most of the violence” that did occur was actually incited by officers “against the BLM protestors.” As we can see, the numbers don’t lie: the police units targeting BLM protests had inherently disrupted the peace they were deployed to maintain.

Fast forward to 2021 and, lo and behold, the same Trump supporters that once condemned the BLM protests on the egregious assumption that they procure violence have now resorted to violence themselves. Despite this, the federal government was initially slow to react to the riot that had only continued to escalate by the minute. According to former chief of the U.S. Capitol Police Steve Sund, “security officials at the House and Senate” denied his requests to summon the National Guard six times as the assault on Capitol Hill transpired. The delay alone consumed crucial time that, according to Sund, could’ve been used to keep the riot “at bay” until reinforcements from “partner agencies” arrived on the scene. Even upon (a delayed) arrival, both the local D.C. authorities and the National Guard remained hesitant to employ the same repressive measures used against last summer’s peaceful assemblies–gatherings that, mind you, advocated for basic human rights. I mean, how else could these rioters walk off with podiums and make themselves at home inside the offices of elected officials?

To make matters worse, this attempt to disrupt the confirmation of President-Elect Joe Biden was, in all likelihood, abetted by President Trump himself after he allegedly egged on supporters to “fight like hell” against the election results. This act of constitutional hardball, in itself, comes as no surprise from a man who feigned his ignorance of KKK leader David Duke and openly refused to condemn Proud Boys–an alt-right, white supremacist group–on a nationally televised debate. Of course, these allegations provide the grounds for a second impeachment effort, which may rectify the violent demonstration at the Capitol by forcing Trump out of office once and for all. Until then, Americans who are truly concerned about racial equality should continue to call out the hypocrisy in the exercise of the First Amendment right to assembly and, ultimately, “stand by” in rooting out white supremacy in our nation.