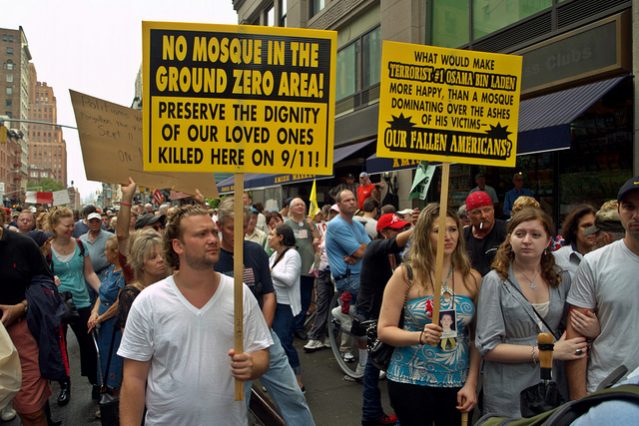 [dropcap]T[/dropcap]he Question: Is Islamophobia a good thing for Muslims?

Every coin has two faces, every spectrum two ends, and every argument two sides. This lingering question is no different.

People tend to naturally fear what they do not know, so to overcome that fear they have to face it, explore it, learn more about it––in this case, people that fear Islam have to explore Islam, but why should they?

Because as natural as it is to have fear, it’s just as natural, if not more, to want to overcome it. No one wants to be scared of anything, and that desire can inspire a person to learn about his/her fear so that he/she can address it. This could explain why at the height of Islamophobia post 9/11, people continued to convert to Islam after learning more about this faith.

Going back to fear, some Muslims also believe that Islamophobia provides a ‘psychological venue’ or, more simply, an opportunity to speak to and inform people about our faith. Why?

Similarly, Islamophobes are willing to talk, argue, or learn about Islam when given the opportunity. And that willingness gives Muslims an opportunity to explain, clarify and teach our faith.

Other Muslims don’t really see it as a good thing because they believe Islamophobia as we know it today is no longer “Islamophobia”. It is no longer just a fear of Islam, it has become a loathing of it. And the masses, for the most part, have been manipulated, their fear turned to hate by a small, powerful group with an evil agenda (but let’s not delve into that).

Human nature does allow for fear, but it’s human weakness that allows fear to morph into hate. Islamophobia as a fear of Islam may very well be a good thing, but Islamophobia as a hatred of Islam, not so much.

As for those people that are still true Islamphobes (only fearful but not hateful), they may still be inclined to learn about Islam. Under normal circumstances that’s not a bad thing at all, but once you throw Google into the mix, it certainly can be. Virtually everyone that may want to learn about Islam at some point consults Sheikh Google, and this “Sheikh,” for someone that doesn’t know any better, really does suck.

There are numerous anti-Muslim sites on the web and that’s a definite no-no for someone who doesn’t know much about our deen. And of the few legitimate sites on the web, only a few are completely reliable and accurate.

As a Muslim, I like to think of the glass as half-full, not half-empty. So, Islamophobia to me is favorable but that doesn’t mean I refuse to acknowledge it’s capacity to be unfavorable.

If anything, it should be a wake-up call for us, to address the concerns people have about Islam before they become haters and before they start hitting up the wrong sources that may continue to mislead them.