The Problem with FEMEN 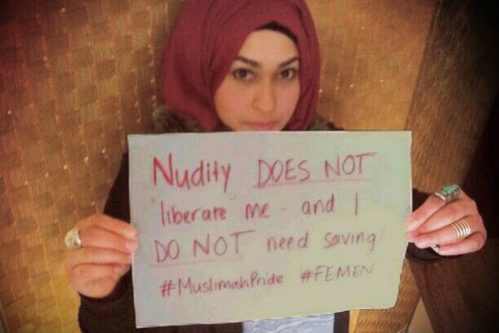 [dropcap]T[/dropcap]he hijab, perhaps Islam’s most conspicuous religious marker, has at numerous times been the center of controversy. Donned by women across the globe, wearing the hijab is more than just a means of adhering to standards of modesty. It represents a coming of age, a lifestyle consisting of moral choices and actions, and, of course, utmost submission to God. Simply attempting to describe the significance of the hijab does not do it justice. As a metaphysical process, wearing the hijab can only truly be understood by the one under the veil. In societies that supposedly respect freedom of religion, how is this piece of cloth received and perceived?

Let us examine France. For a nation that purports “liberty, equality, and fraternity”, how is it that France actively bans the hijab in public institutions? In 2011 it went a step further and officially outlawed the burqa. According to former president Nicolas Sarkozy, banning the burqa was necessary because, “We cannot accept to have in women who are prisoners behind netting, cut off from all social life, [and] deprived of identity”.

The banning of religious clothing, as paradoxical as this is to France’s national motto, is not a recent idea. Dating back to the days of French colonialism, as part and parcel to France’s mission civilize, the French had an agenda that consisted of “saving” the veiled women of Algeria. “Saving” the population through the spread of civilization was nothing but a guise for establishing Western dominance. Fast-forward to 2004 and French politicians are repeating the same trope of trying to “save” Muslim women.

Dangerous assumptions like these perpetuate the mentality that the West must intervene as the “savior of oppressed women”. That it must free the subjugated and restore justice. This is the same rhetoric that is used by groups such as FEMEN. Headquartered in Kiev, FEMEN is an ultra-feminist organization that has gained international notoriety within the last few years. While FEMEN’s overwhelming dedication to women’s rights should be commended, their modus operandi is questionable. Participants in FEMEN protests go topless.

A day of protests recently organized in solidarity with Tunisian activist Amina Tyler, provoked outrage in the Muslim community. As a self-identified FEMEN “sextremist”, Tyler, 19, posted topless photographs to the group’s Tunisian Facebook page. With red lipstick and a cigarette in hand, Tyler is photographed with Arabic scrawled over her bare chest. The message, which translates to, “My body belongs to me and is not the source of anyone’s honor” is just one of the messages she conveys. In a second photograph, “F*** YOUR MORALS” is plastered on a once again, topless Tyler (on the actual photo, the word is not censored).

The backlash Tyler received for her indecent exposure led to death threats. A Tunisian cleric issued a fatwa (non-binding legal recommendation) that stated that Tyler be stoned to death for her indiscretion. Incensed by his remarks, FEMEN activists took to the streets to stand in solidarity with Tyler against the perceived patriarchal oppression of Islam. April 4, 2013 was proclaimed “International Topless Jihad Day.” In Ukraine, France, Italy, Belgium and Sweden, topless women congregated and chanted slogans such as “Muslim women, let’s get naked,” all the while condemning the hijab. Three FEMEN activists in France went as far as to burn a flag inscribed with the shahada, the Islamic declaration of faith. This insult was the last straw. The desecration of any religious symbol is indefensible and any Muslim offended by this action has every right to be. Muslim women opposed to FEMEN’s actions quickly united to form a counter-protest: Muslim Women Against FEMEN.

Muslim Women Against FEMEN have come out not only in defense of the hijab, but in defense of their religion. By and large, the ethos of non-Muslim feminists have been antithetical to Muslim women. Non-Muslim feminists, like the FEMEN activists that contributed to “Topless Jihad Day,” project an ethnocentric vision of feminism. These women, particularly white feminists, view the hijab as being a tool of oppression and therefore feel the need to “save” Muslim women. The false assumptions they have of Islam espouse a disturbing Orientalist attitude that has yet to disappear. If the FEMEN activists are so concerned about the welfare of Muslim women, why would they insult an entire religion? It seems as though they forgot that wearing the hijab is a personal choice.

Non-Muslim feminists essentially belittle the work of great Muslim feminists like Leila Ahmed that have made invaluable strides. FEMEN, and those that hold similar beliefs, genuinely think they are doing Muslim women a favor with their topless protesting. This is hardly the case. Muslim women do not view the hijab as being oppressive, rather, it can be liberating. Demonstrating disapproval of the hijab through nudity is counterproductive. Is stripping off one’s clothes an effective method of battling sexism? I think not. Degrading oneself in public seems to perpetuate the sexism that FEMEN aims to eradicate.

This dichotomy between liberation and oppression will most likely not be reconciled in the near future. Groups like FEMEN must learn to stop appropriating a religion that is not theirs. Just as there is variety in Christianity, there is variety in Islam. Muslims are not part of a monolithic group that thinks and acts the same way. Assuming that all Muslim women that wear the hijab are oppressed because of patriarchy is truly a gross simplification. Yes, patriarchy may exist in Islam but what major religion is not patriarchal in nature?